The Big Train Was Correct

Today's feature about the visual component of shooting is from our parent service, The Outdoor Wire -- and our publisher, Jim Shepherd.

Baseball Hall of Fame pitcher Walter Perry Johnson once explained why he was successful: “you can’t hit what you can’t see.” He wasn’t exaggerating.

Prior to September 24, 2010, when Aroldis Chapham’s fastball was clocked at 105.1 MPH, Johnson was regarded as the fastest pitcher ever in the major leagues. His fastball, and a nasty curve he learned, were reasons he had ten straight 20-win seasons for the Washington Senators and won a place in Cooperstown.

The quote has often been mis-credited to the ultimate quote athlete, Mohammad Ali. But just before fighting George Foreman actually said this: “Float like a butterfly, Sting like a bee. His hands can’t hit what his eyes can’t see.”

Whew, a roundabout way to get to my point. And I do have one.

Even if you’re a longtime shooter, you’ll -eventually- come to a point where you simply aren’t as accurate as you once were. I hit that wall a while back.

Since my draw stroke and split times were never threats to real shooters, I hadn’t lost time. I had lost accuracy. And after taking out other variables, it became obvious it was the shooter, not his equipment.

With that bitter realization, I reluctantly cleaned and stored my competition pistols in the safe, convinced that, eventually, everything you enjoy ends.

When the same thing started happening to my golf game and my night vision dimmed - rapidly- I thought something might be wrong -medically.

Two years ago, my optometrist assured me it wasn’t vision problems beyond presbyopia -the age-related loss of the ability to focus on close objects (also known as “age-related farsightedness”).

This checkup he stunned me with the news that I had cataracts - in both eyes.

What wasn’t an issue before certainly was one now.

Because of COVID shutdowns, I hadn’t had an eye exam for two years. But I had spent an inordinate amount of time outdoors during those 20+ months. I had, essentially, exacerbated a mild irritant into a full-blown problem. That’s when I realized I seldom wore sunglasses. For some reason, sunlight didn’t bother the way it once did. Dark shades, however, made it hard for me to see.

You might see a “duh” moment here. I prefer a “eureka” one. There was a medical reason why I wasn’t seeing well - my lenses were clouded.

Long story shortened, two surgeries and implants later, I have much of my vision back. Stopped wearing glasses entirely until I realized the presbyopia was still an issue.

But my new glasses aren’t nearly as strong as their predecessors.

Where’s this going? To the range, of course. But not for eight weeks after my final surgery.

Until then, it was dry fire only. Fortunately, I have Mantis’ excellent training gear for dry firing.

As I’ve written before, it has enabled me to get beyond the boredom of dry firing.

Unfortunately, it couldn’t help me if I didn’t use it. After my shooting had gotten worse - despite practice - I quit practicing. 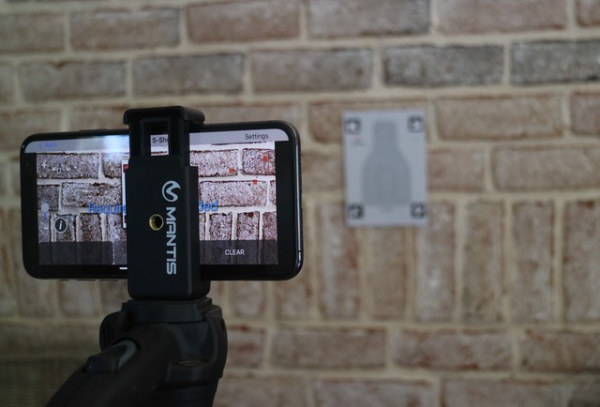 When using systems like Mantis’ Laser Academy you dry fire at targets, the sensor on the gun measures what’s happening before, during and after the shot and displays the inarguable facts about your bad habits.

The Mantis system diagnosed problems (lazy habits like a loose grip, yanked trigger and/or bad follow through) and suggested remedies. Seeing my results graphically displayed forced better discipline. A couple of weeks in, there were some indications maybe I wasn’t done as a decent shooter. Dry fire wasn’t doing anything to repair worn out fast-twitch reflexes.

Finally I was cleared to shoot -and see - what -if anything- had changed. No test is more telling than sending real rounds at a target.

Initial sessions weren’t terrific. But there were improvements, especially at closer ranges- where I’d struggled before.

But no attempts to shoot faster. So I decided on an impromptu test: a pair of 9mm magazines loaded with 12 rounds, quickly dumped into a target at 7 yards.

No moving around, just controlling the gun and putting rounds on a target. As quickly as possible.

Not timed, but hopefully approaching the edge of my control. Where good shooters want to work. As Wyatt Earp’s credited with saying: “fast is fine, but accuracy is everything.” 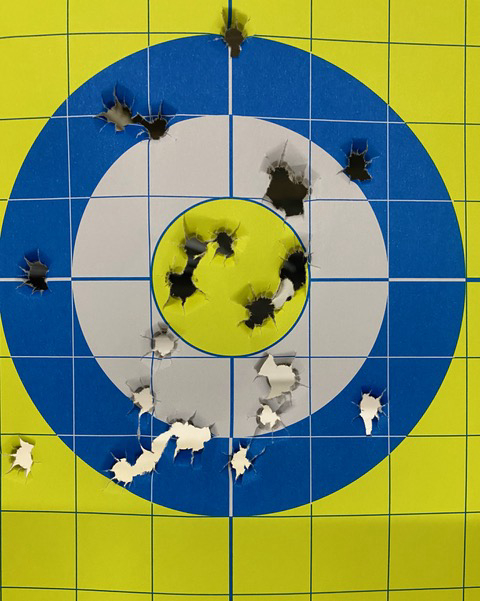 24 rounds, no misses in an area slightly smaller than a Steel Challenge plate. Good enough to give me hope.

The results? Encouraging. Far from “one ragged hole in the center of the target” but all in a spread that would be good “hits” on a Steel Challenge plate.

Good enough for me - I’m not a fan of bullseye shooting with handguns. But ringing steel I enjoy.

Ultimately, this isn’t about shooting, or baseball or boxing, or gun fighting. It’s about vision.

If you’re finding it more difficult to drive at night, or in the rain, find yourself needing brighter lights to read smaller print or don’t see road signs very well when driving -and you’re 55 years old- it’s time to make an appointment with to have your eyes checked for cataracts.

As outdoors enthusiasts, we are prime candidates.

The recreational pleasure you save might be your own.

My pal Tom Gresham described the difference to me after his cataract surgeries as “like going from color prints to Kodachrome.” If you’re a photographer old enough to remember either, you’re a candidate for cataracts.

Get those peepers checked. You may see things differently if you do.