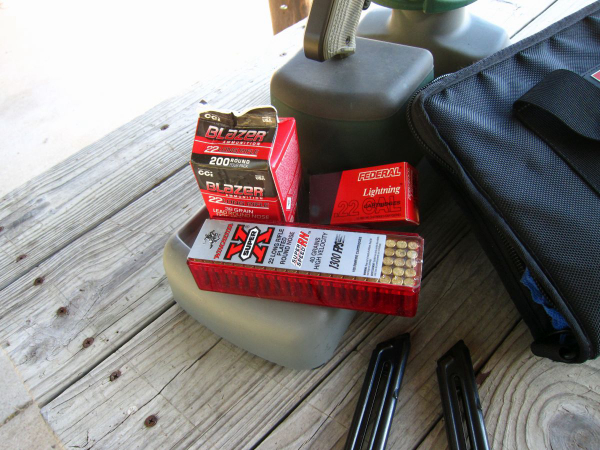 As I’d done a quick and dirty evaluation of bulk-packed 22 LR ammo here – checking for relative accuracy in two different small handguns – I thought it appropriate to get out the heavier hardware and check that load against two others: not premium target stuff, but bulk versus old-production promotional ammo versus current high velocity ammo.

The guns are similar and quite different. One is the Ruger MKIV Target from 2016. A 5 ½” bull barrel, target adjustable sights and alloy frame under a steel upper, this heater is only changed by the stocks, Hogue, Inc. G10 stocks specifically made for the Ruger Mark IV.

I got the diamond checkering in the “G-Mascus Green” color. Replacing the stocks wasn’t difficult – you just have to slide the old stock out from under the bolt lock on the left side of the gun. Replacing the Ruger stocks with the Hogue G10 product was a matter of slipping the new panel under the controls just right and tightening the stock screws.

The other pistol was an early Smith & Wesson SW22 Victory. I’d installed an after-market barrel – the Volquartsen carbon fiber THM tension barrel – and a red dot sight, the C-More RTS2. The optic would help the old eyes but not the ability to grip. 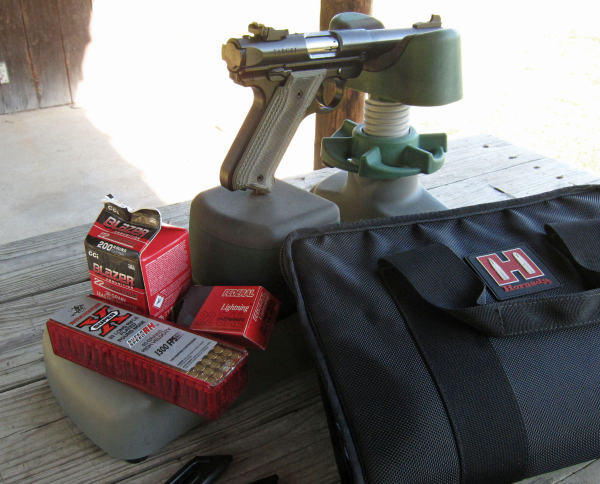 The Caldwell rest, left by another range user, was handy. Below, the Blazer range ammo shot well in the Ruger MKIV. 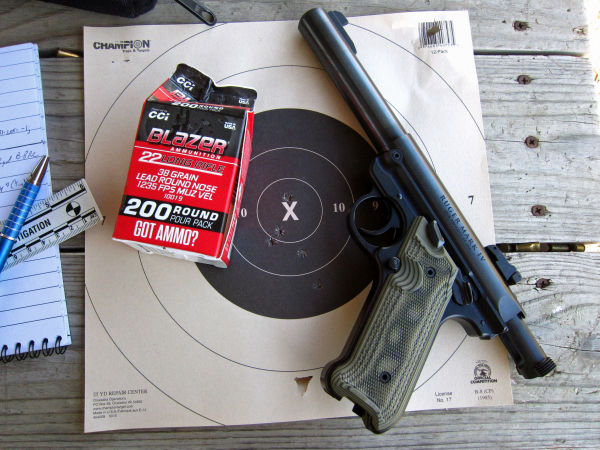 When I arrived to the Rimfire/Blackpowder Range, I saw that someone left a Caldwell “Pistolero” shooting rest – a rather considerate shooter, I thought. I used it for the test and then put it back where I found it.

A word about the rest: it’s handy. It doesn’t cost much and it’s not fancy, but it keeps the gun relatively still even when it’s me trying to grip and press the trigger without undue motion in the gun. I appreciated the ‘free test’ aspect of it and intend to look into the product further.

The ammo was some old – I mean old – Federal Lightning High Velocity 40 grain, the aforementioned CCI Blazer 38 gr. sold in their milk carton-like “200 pack,” and a box of current Winchester Super-X 40 gr. HV.

The Ruger was sighted in with Federal HV Match, the S&W – well, I have no idea what I sighted in with. It didn’t matter at the relatively close range.

Strangely, the Blazer 38gr. ammo was arguably the accuracy champ in the Ruger, at 2 ¼” with four of those hits inside of 1 ¼”. That’s with iron sights and about the best I can do. The Winchester Super-X was close behind with five bullets into 2 ½”, three hits clustering into 1 1/8”. 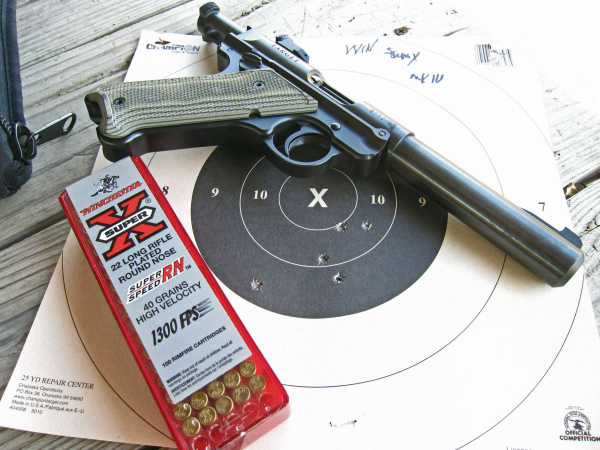 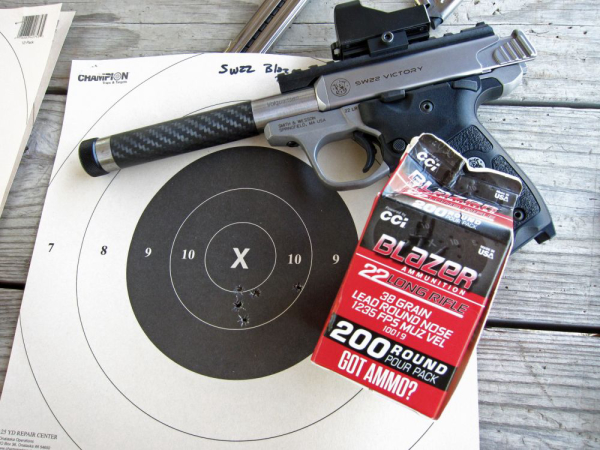 The old Federal Lightning yielded a strange result. Five rounds went into 2 ½”, like the Winchester, but three of those hits crowded into 7/8” – as this was the last type fired in the Ruger, it could have been ‘training effect.’ Or it could be that it’s still really accurate.

The SW22 Victory – with Volquartsen barrel and C-More optic – was more easily fired than the iron-sighted Ruger. But that didn’t yield a consistent result either. The Blazer shot stunningly well, with five hits into 1 3/8”. Three of those hits (more closely approximating what you’d get from a machine rest) went into ¼”!

The Super-X wasn’t appreciated – or I messed up – with a three-inch group. The best three into 1.5” was more what I expected for five hits. The Lightning saw a 1 ½” five shot group, with the best three shooting into an inch.

I finished by firing off-hand. I selected a distant steel target with the optics-equipped S&W. That’s when I found a problem. All the ammo shot fine, except the Federal Lightning in the SW22 when shot off-hand – not off the rest. I was getting failures to eject, making me think the indifferent storage of the old rounds could have been a problem. 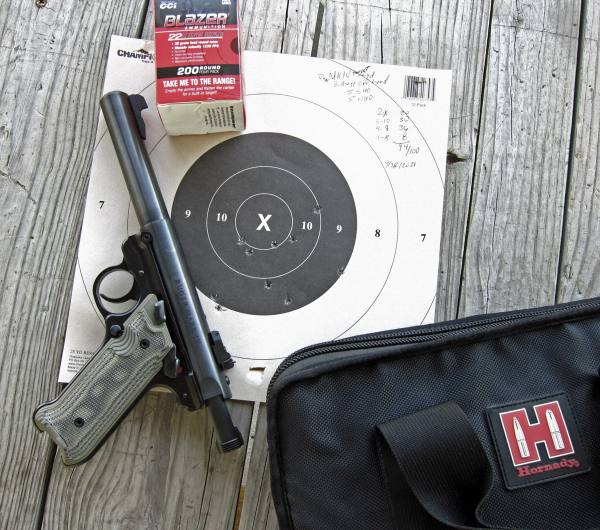 I finished by standing behind the shooting table and firing one-handed ‘bullseye’ strings on a B-8 repair center. I used the Ruger MKIV for this, opting for the iron sights for purposes of practice. The ammo was the non-target bulk-packed Blazer. The first five rounds were fired dominant hand only and the last five were fired with the nondominant hand unsupported.

I totaled up a 94/100-2X. Had I held at the top of the bull, three of those low-9s and a single 8 would have given a better score. That’s on me. I didn’t find the group to be less than pleasing and it is superb practice.

A good early Fall project is trying those rimfires out. See what you’re getting for groups, check your zero. It beats ‘social’ media.