The classic Smith & Wesson Combat Magnum, built before the S&W “model number” series, is a K-frame (“38 frame) six-shot revolver chambered for the 357 Magnum. Previously, the 357 Magnum chambering in S&W revolvers was available only in their Magnum revolver and Highway Patrolman lines, the latter being a subdued, less expensively finished version of the Magnum revolver series.

It seemed to Border Patrol Inspector Bill Jordan that the larger, 44-frame revolvers were a lot of gun for the mid-sized magnum. He also recognized that nearly everyone shot 38 Special loads for practice and qualification with their law enforcement 357 revolvers, saving the Magnum stuff for “duty” use.

If you do the high round count with 38s, why do you need the big “44” frame to lug around all day?

He went to S&W with the idea that they fabricate a heavy barrel Combat Masterpiece (keeping the adjustable sights) and chamber the cylinder for 357 Magnum. I believe they extended the cylinder (and the receiving “window” in the frame), recessed the chambers so the case heads would be surrounded by steel and fitted the four-inch guns with their ‘target’ stocks. 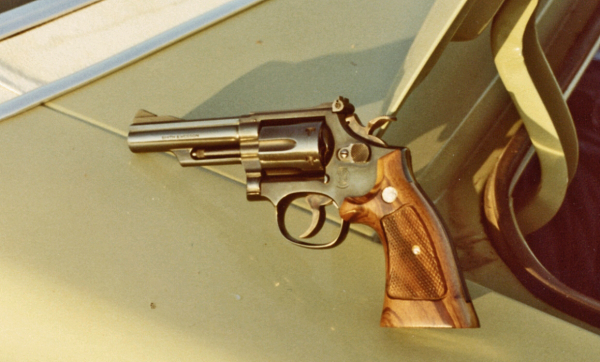 This Model 19 Combat Magnum was purchased through LE distribution channels in 1980 by a friend. Below, the M19 -- and its stainless counterpart Model 66 -- was a commonly carried handgun by police. 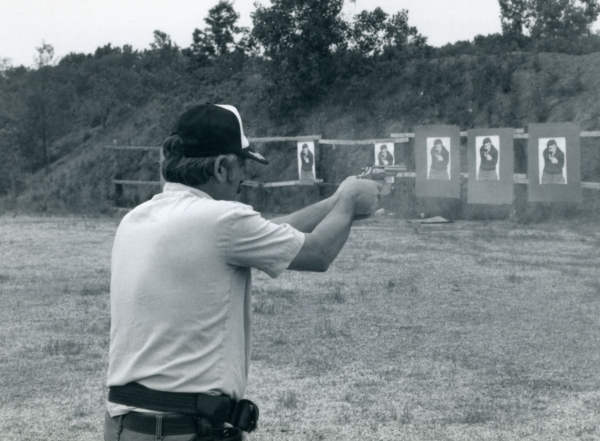 The front sight was of the Baughman “quick draw” ramp style. Target trigger and target hammer features were available if ordered. Later, a red plastic insert in the front sight and a white outline around the rear sight notch were made available (RR/WO, if you see one for sale).

Due to some controversy surrounding shooting incidents in the 1970s, a number of agencies decided that all shooting with duty guns had to be accomplished with duty ammo (or remanufactured equivalents). That’s a lot of magnum ammo being shot.

Further, the 158 grain lead semiwadcutter load that was about the only factory 357 load available when the Combat Magnum issued (and into the “Model 19” era as well) was supplanted with lighter, faster jacketed rounds. The standard weight for caliber was 158 grains, like the 38 S&W Special; for that reason, the 158 grain jacketed soft point came first, followed by the 110- and 125 grain JHP loads.

The 125 grain JHP loads were seen by some as the “magic” bullet. A large percentage of dangerous felons seemed to be quite impressed with the effects of the cartridge. The Model 19 Combat Magnum saw some serious wear issues with the newer load – as did the stainless-steel Model 66 Combat Magnums. 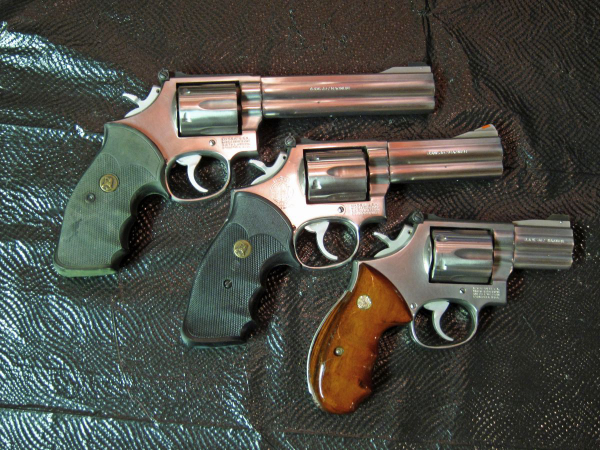 S&W, wanting to stay on top of the “issued police revolver” lists, announced the Distinguished Combat Magnum series in 1980. Starting with the Model 586 and Model 686 (stainless steel), they also made fixed sight versions, the Model 581 and 681 Distinguished Service Magnums.

Made in the “less than N-frame (44) and more than K-Frame (38),” it was dimensionally similar to the 41-frame Colt DA revolver lines. The weight went up. The barrels were heavy with a full-length underlug. The frame and cylinder were bigger – but the stocks were the same as for the K-frame.

I had a M686 4”, one of the early guns. I went to another agency and was issued a 4” Distinguished Combat Magnum in 1983. I carried that gun, loaded with issued Winchester 145gr. Silvertip ammo, until late 1986 when we went to the autoloading pistol.

But I’m not carrying either these days.

Which is “better” -- the K-frame Magnum or the L-frame? Neither. They’re just guns and they’ll do if you will.