Bought a Gun? – Read a Book

Here at the Outdoor Wire Digital Network, we received reader emails asking for advice they can give to new gun owners. You bought a gun. Ammo’s scarce and classes – where they’re happening at all – are constrained to class size, plus people are in line trying to get in. Is there a book – or books – to read to help them understand the gravity of their decision?

Some of the new owners “have minimal experience at a range with friends …,” but others “especially those who have traditionally leaned left, (don’t have) a clue.” At times advice is asked after the purchase of a gun is already done.

While we can say “get training,” there are far more new gun owners than there are instructors or ranges for potential classes. A good many can’t – for whatever reasons – spring for a class at Gunsite, Firearms Academy of Seattle, etc.

What one book would we suggest to a new gun owner that covers the basics of self-defense? If they can be turned to another book, what other book would we recommend?

While one correspondent was about it, some specifics were asked, to wit:

1. “What can a new owner read to give them the basics of armed self-defense with little or no prior knowledge of guns – but the gun is already purchased?”

2. “What book(s) can give an understanding of the basic legal/moral issues involved?”

3. “What book(s) can educate as to the physiological issues they’ll face?”

That’s a tall order. Going to first things first, I’m a bit less concerned with teaching gear, law, ethics and the like without first addressing problems we’ve seen in the past. For that we turn to our friend Claude Werner, the Tactical Professor. There’s nothing he’s written that’s not critical for new, untrained types (and for the rest of us too). The standout for new owners is Serious Mistakes Gunowners Make – The Book. Also available in spoken form, the book is not about shooting firearms; “it is about Decision Making, specifically what leads to Bad Decision Making.” 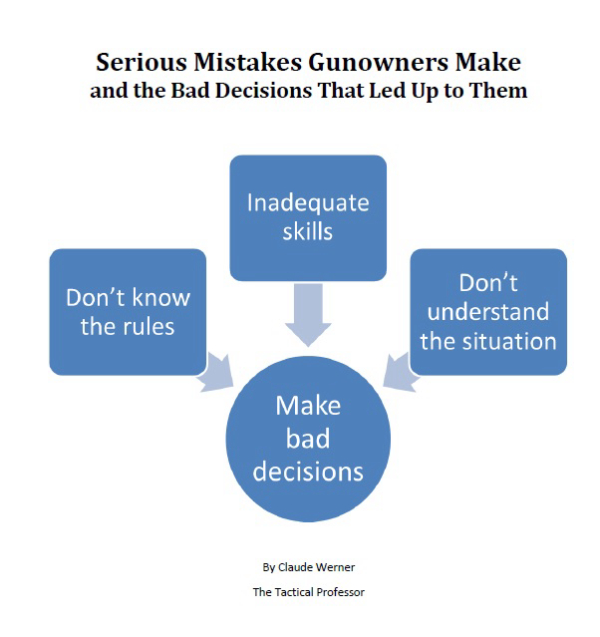 This is a thinking person’s game. What you think leads to decisions, which lead to actions – which lead to outcomes. While caliber commandos and gear-heavy types discuss minutia at length, people don’t see the “desired outcome for owning” the gun.

If you can operate the gun safely, the big issue is knowing what to do … and what not to do. This goes well beyond defense to other more common, still critical issues including safe storage, laws regarding carry of firearms – or even simple possession of them.

Avoiding mistakes is a good idea. These are characterized as Legal Mistakes, Imprudent Mistakes and Mechanical Mistakes.

“In the course of my research, I also found numerous lists of ‘Concealed Carry Mistakes’ or similar subjects. However, what I noticed was that those lists mostly focused on what gunowners and carriers do that deviates from the dogma of the training industry. (Emphasis added.) What they didn’t do was to cite actual examples of how people had gotten into trouble with guns, the decisions that led to their predicament, and how to avoid them.”

Owning a gun is a two-edged sword. We balance power with responsibility. I learned early on in my association with Massad Ayoob a confirmation of what I’d been taught as a child: with every advantage, privilege, right comes an equivalent responsibility. You own the decisions you make – and you pay for them.

To avoid these mistakes, a good many not covered in typical classes for concealed carry licensing, you need to read this book. Why make the mistake when someone else already has?

Consider this: “Firearms need to be a thinking person’s tool, not merely a talisman kept in a dresser drawer. When they are necessary to prevent death or serious bodily injury, firearms are an absolute necessity. The rest of the time, we need to be constantly aware of the fact that they are potentially deadly instruments to be treated with utmost care and attention.”

There are three books in this category. The first is the smallest and now available on the internet at no charge. If you think that “expense = value,” you’d be wrong in this case. The second and third are broadly available through one of the biggest publishers of gun books out there. They cover the ground from gear and goods through application through understanding the dynamics of criminal violence, physio-psychological aspects of deadly encounters and the legal battlefield.

First, we have the second edition of Defensive Use of Firearms – January 1, 2010, by Stephen P. Wenger. Concise, clear and well-illustrated, it gives a grounding in defense gun use. It includes “a continuum for close-quarters combat,” something that’s given little consideration in many places. It’s packed with common sense advice, nicely illustrated to assist comprehension. There’s a glossary, necessary to communicate in the technical field of guns – and the law.

He goes through safety first, as one should, including what’s come to be taken as Rule 5 (of the Four Rules). He properly considers the critical aspects of defensive gun use in order as mental awareness, mental preparedness, tactics, skills and choice of equipment.

All of the book is choice material – and he’s someone who still articulates a “safety circle” to keep the muzzle orientated to avoid those pesky Rule 2 issues.

You have nothing to lose – but a lot to gain – by reading this book.

The next book in the ‘basics’ category is the broadly based, well-illustrated and explained , Concealed Carry Class: The ABCs of Self-Defense Tools and Tactics. As the title states, it’s a complete course – all but the shooting on the range in front of an instructor/coach and the state/local law issues.

Rangemaster Firearms Training Services was founded by Tom Givens, an experienced peace officer, trainer and past-owner of the range which had been the primary source for handgun carry permit certification in the “high action location” known as Memphis, Tenn. His training resume is profound and long. 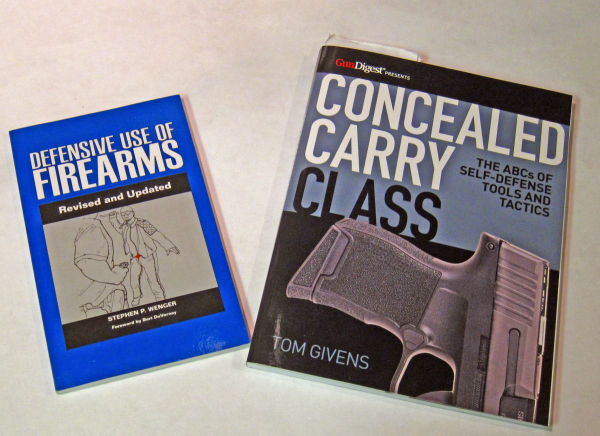 The books by Wenger and Givens are outstanding primers for armed self-defense. Below, line drawings by Jeff Cahill illustrate Wenger's book, and enhance understanding. 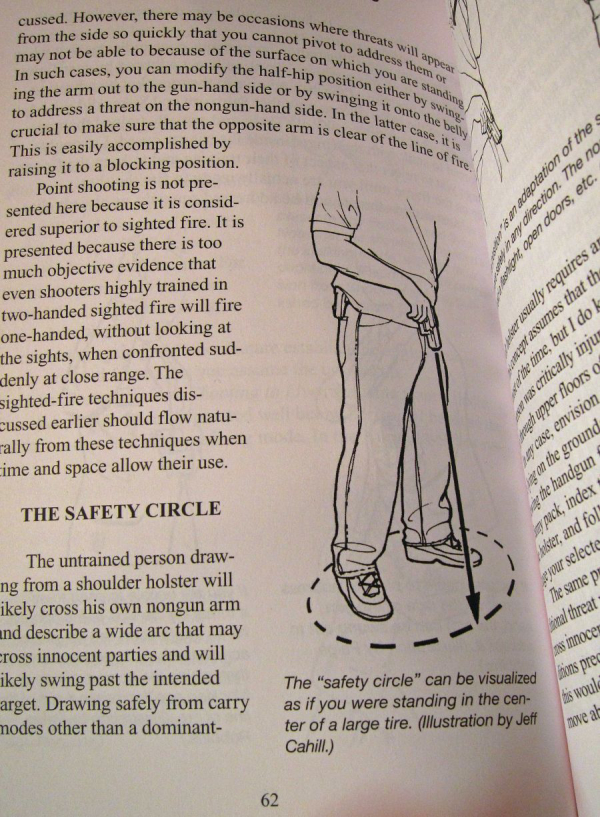 The first part of the book accounts for the ‘software’ issues, those things that are critical and too seldom addressed. This includes general legal issues, stress mitigation, awareness and decision-making under stress. The second part is the gear: selecting the firearm, support gear, ammunition as well as technique – how to shoot.

Consider the essential issue: why carry a gun? What’s the problem you seek to solve? That can be followed up with the social consideration: is it legal . . . are you “permitted?” Once you pass that obstacle, consider when can you . . . should you, must you . . . use deadly force – or any force at all.

He mentions ‘intelligence’ activities, considering how ‘the other side’ thinks and acts. Here’s a clue: they don’t think like us. You have to recognize the problem before you can act to counter it. This calls for threat assessment to guide your training priorities – what do you have to prepare for . . . what should you prepare for?

The factors he draws are from three good sources of reality: shootings engaged in by FBI, DEA and Rangemaster students (who self-reported). He lists some courses of fire upon which to practice.

For less than a couple of boxes of practice ammo, you get a lot of information – and a way to guide your use of that ammo. Give it a read – even if you are going to a class. You’ll learn things.

Finally, if you want to know what the battlefield looks like, how the enemy thinks and operates, how to best prepare for battle and what potential disasters await in the aftermath, you need to buy this book: Straight Talk on Armed Defense.

Edited by Massad Ayoob, it’s a collection of articles from the top in the fields of mental preparation, awareness, psycho-physiological issues, the aftermath of the event, examination of the violent actor, recognizing pre-assaultive behaviors, mental programming and more. The rest of the book includes top flight pieces on training and the legal aftermath – by people well versed in the issues.

More important than the gear -- guns, calibers, ammo, support gear – is the preparation of the person who has to face the threat. It’s best to avoid the fight: if you learn nothing else from this book, you learn that. More importantly, you need to not be surprised by the inhumanity of the violent criminal offender.

Someone who writes (and speaks) intelligently about practical aspects of armed defense -- Massad Ayoob -- is also educated in the legal aspects. Along with the legal, he also has edited a book by experts on preattack cues, criminal mindset, awareness, psycho-physiological issues, and more.

First, we look at the book that started it all in the field of the legal aftermath of defensive gun uses: In the Gravest Extreme: The Role of the Firearm in Personal Protection. Not a new book, still relevant to give context to the current situation, it’s the primer on the judicious use of deadly force. It is essential groundwork for the potential legal attacks – criminal and civil – that can follow self-defense. The update to it, likewise critical –due to its timeliness – is Deadly Force: Understanding Your Right to Self Defense.

An additional 30 years of experience in court as well as changes in the national landscape in the area of lawful carry of firearms (with- and without permits), changes of the Castle Doctrine in terms of lessening the requirements to demonstrate you attempted to retreat – all combine to make this an essential in understanding the ethical, moral and legal issues in armed self-defense.

Mas isn’t a lawyer – though he’s presented at continuing education classes for lawyers – and he doesn’t give legal advice. He’s a guide through the treacherous venue, the legal morass leading up to and during litigation.

While you’re about legal aspects, sign up for the Armed Citizen Legal Defense Network – Not insurance, but a group that combines a group of attorneys and a funding mechanism to assist in the aftermath of a self-defense incident. Not only does it provide assistance with legal fees, there’s a considerable education effort in the Network – and that alone is worth the cost.