The “Challenge” with Trainers

If you’ve been following the wires this year seems to be “year of the rimfires” for some of us. Of the guns recently received, a pair of them are analogs to centerfire guns, one an extreme compact (Ruger LCP II “Lite Rack” 22 LR) and the other a service-compact (GLOCK 44).

In keeping with the appropriate practice protocol for subcaliber trainers, I could go for singles from ready, singles from the holster, reload drills and trigger control work. I elected to run one of the guns on a trigger control drill I stumbled across on social media. Found on various firearms fora, “Rastoff’s Challenge” seems to have appeared in around 2015. I found it on a social media page where a person was doing the challenge with a particular firearm he’d picked up. I thought it looked interesting and having the (specified) NRA B-27 repair centers, elected to give it a go with the GLOCK 44, as the understudy to a service gun. While I was about it, I’d go for 5-yard precision on the ½” numbers printed on the target with that gun and with the LCP II.

A bit about the NRA B-27 target. It’s for “competition, training and qualification” and was considered more stringent than the old B21 that was used before it. In “qualification mode,” the target is scored five points per any hit in the 17 ¾” high by 11 ¾” wide “8” ring. The numbers printed on the target are about ½” high.

Unfortunately, too many agencies used the B27 in its qualification mode. At one time, Texas used their proprietary (and better) target for their qual and for CCW permits in the Lone Star State. Unfortunately, they’ve gone to the old B27. Like most states using it for non-sworn permits, a hit anywhere on the barn-size target is worth as much as a hit in the X. The target is two feet wide and three feet high . . .

The objective of “Rastoff’s Challenge is to place all hits into the 2”x3” oval X-ring over the course of fire, shot with no time limit. 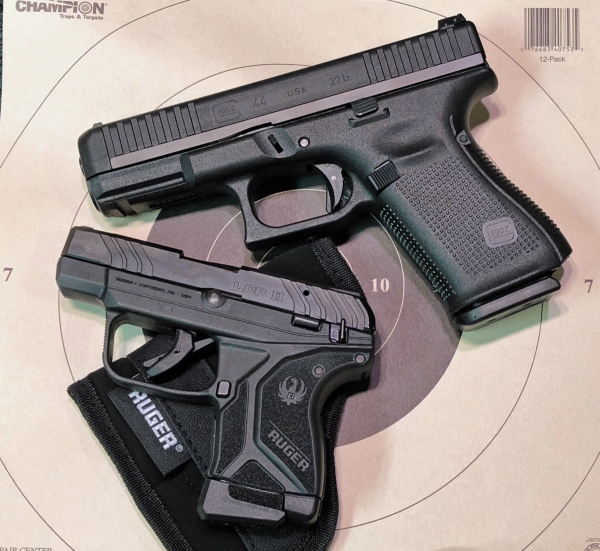 Above, the pair of guns used in trigger control practice. Below, "Rastoff's Challenge" failed by hitting high with the G44 -- still a good performance from gun and ammo. 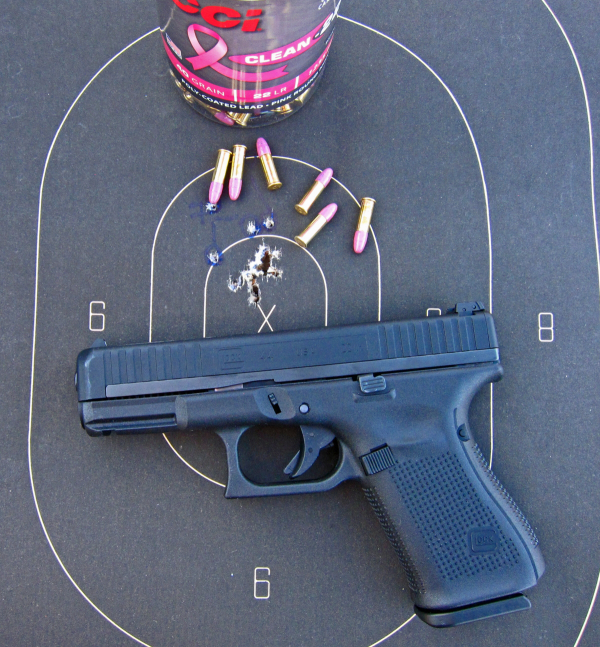 The creator says that it’s a “(n)ice, easy course of fire that only takes twenty rounds.” To accomplish this, the GLOCK 44 was fired using its (so-far) favorite CCI “Clean-22” load and the Ruger LCP II 22 LR was shot using an old box of Federal “Lightning.”

I like to find appropriate range exercises and added the following notes to open the “Challenge” into practice protocols:

- To work the draw, each round on each string is a single from holster.

- To get to the draw, each round on each string is from contact ready (a stage of the draw)

- To work reloads, make each string with a chambered round over an empty mag.

For any of these options, maintain the X-ring standard. Don’t shoot faster than you can nail the X.

Firing the G44, I was surprised by using only the top 1/3 of the “X” ring at three and five yards, throwing a pair high out of the preferred scoring zone at seven yards. One of those cut the ring – I count that as a “miss.” The other was just over an inch over the ring on the left. From ten yards, even favoring the bottom 1/3 of the X-ring, I had one pair just over the ten-ring. Measuring the aggregate, I found that the entire group would have fit inside the X-ring. 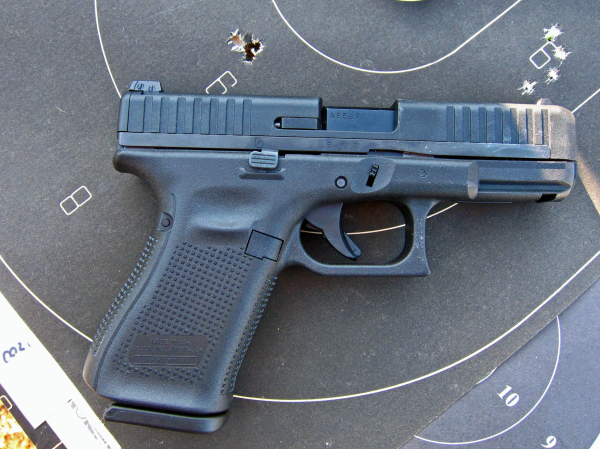 Working the "9's" -- 1/2" numerals on the target -- from five yards, gave a one-hole effort seen just above the G44. The pint-sized "Lite-Rack" LCP II 22 did a credible job with some elderly Federal Lightning ammo shown below. 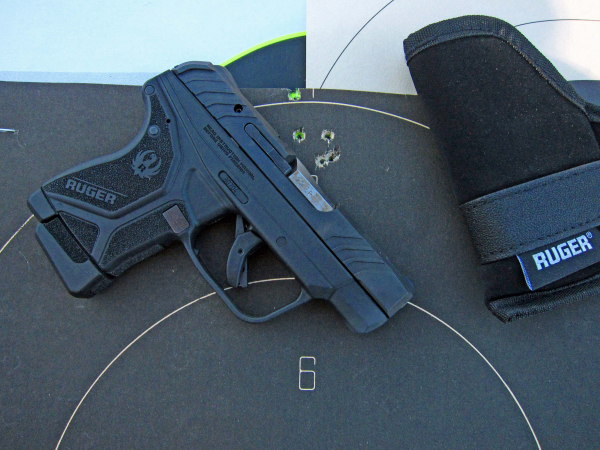 I began working the numbers “9” printed around the ten-ring with the G44. The first group was a sub-one inch group that was a vertical string. Resetting, I then shot the “9” at the bottom of the ten-ring with five rounds. As the image shows, all five rounds were touching. I was shooting at the ½” numbers from five yards.

Breaking out the Ruger “Lite-Rack” LCP II and an old box of Federal “Lightning” ammo, I began working the pair of “8” numbers from the same distance. The tiny gun acquitted itself well, printing the hits a little high over the number and the best three into a half-inch.

Working the trigger on the lightweights is good practice for working the centerfire guns. And we can all use more practice.