Without Great Britain we wouldn’t have such life-enriching products as Holland and Holland shotguns, Bombay Sapphire Gin and of course, their pinnacle gift to humanity…..Monty Python’s Flying Circus and in particular, comedian John Cleese.

Cleese’s epic phrase “and now for something completely different,” kept repeating itself in my mind’s ear as I stood listening to the shooting instructor. “I’m right handed so I stand with my right foot forward of my left foot, this lengthens my trigger finger relative to the pistol,” he said. Huh? Wait, I’m not sure I got that correctly. His take on foot placement, drawing, grip and ultimate shooting stance was at odds with virtually everything that I’d been taught by all of the “big name” shooting instructors/schools. When it comes to shooting technique, I don’t know that there are “fifty shades of grey” but I know that it’s not simply black and white; little if anything other than safety is dogmatically “right” or “wrong,” but this instructor was pushing the limits of my understanding. 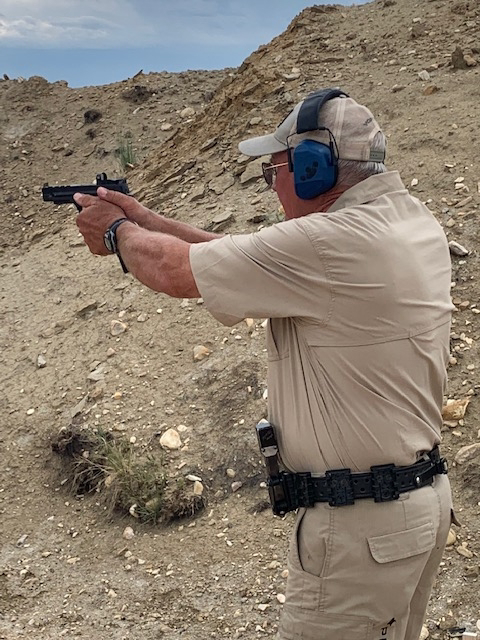 Jerry demonstrates his shooting stance. Arms are bent slightly outward with the elbows high and gun at between 1/2 and 3/4 of arms full extension.

At this point I would have turned off my electronic ear muffs and mentally shifted into neutral had it been a different instructor. Perennial champion and holder of 6 world records for speed shooting, it’s hard to determine whether Jerry Miculek is a “force of nature,” or a “freak of nature.” In his 60’s, he regularly defeats athletic competitors less than half his age. To discount his teaching would be as logical an Alexandria Ocasio-Cortez explanation of…..well….just about anything.

Miculek says that he’s never taken a shooting lesson, he’s just a really observant spectator. When he started out he would watch the top shooters and then practice consciously doing things in an opposite manner which would either confirm or disprove their technique for him. He credits Rob Leatham, Brian Enos and Michael Plaxco for having influenced him early on, although his current methodology is uniquely his own.

Grip. Traditional wisdom tells us that the dominant hand should grip the pistol with the wrist directly behind the butt of the gun so that the gun is in perfect line with your arm. This apparently enhances “natural pointing” and aids in recoil control. Jerry grips the pistol with his wrist shifted around to the dominant side stock which theoretically “lengthens” his index finger relative to the trigger. Thus when he places the pad of his finger on the trigger, his finger doesn’t lay against the side of the stock or frame allowing him to pull the trigger straight to the rear without any “torqueing” of the gun. With the handgun gripped to side, should the dominant arm be fully extended, the handgun would point outboard, or toward the dominant side, thus requiring a change in stance. 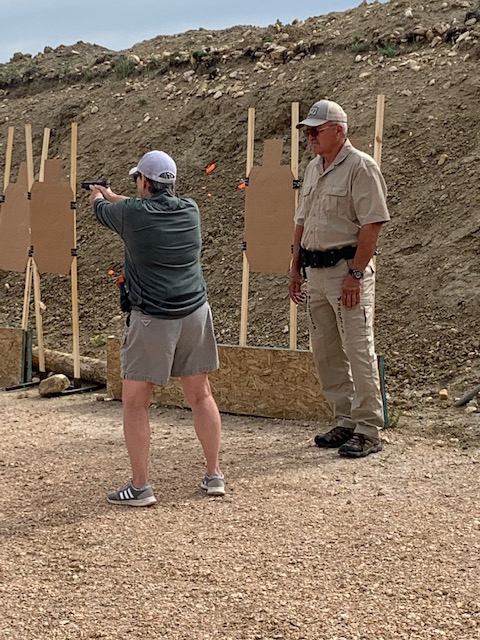 Kay Miculek demos how the pressure you can apply to the gun increases dramatically as you slowly bring it from full extension back toward your body.

Stance. Centering the gun is accomplished by a combination of placing the dominant side foot slightly forward on the support side foot and by holding the pistol at the apex of an untraditional Isosceles triangle. Jerry’s take on the Isosceles stance is unconventional in that he doesn’t hunch his shoulders (frequently called “turtling.”), he bends his arms and he keeps his elbows high and pointed outboard.

Arms and elbows. At this point in the class, Jerry’s wife Kay had us all extend our arms to full length in front of us and then with our elbows locked bring the palms of our hands together and press them together as hard as we could. At full arm extension, it was difficult to exert much pressure. She then had us slowly bend our arms outboard and bring our pressed hands slowly back toward the center of our chest. The amount of exerted inward force catapulted exponentially the closer our hands got to our body. Somewhere between one-quarter to one-half the distance from full extension back to touching the chest is where Jerry recommends positioning the handgun while firing. Jerry first observed this position while preparing for the Steel Challenge. According to Jerry, he was shooting with some "90 pound girls” from the Philippines. The recoil didn’t bother them at all and it was due to the positioning of their arms and elbows, not their physical mass. This combination of grip, stance and resultant arm and elbow positioning requires an alteration to the drawing stroke. 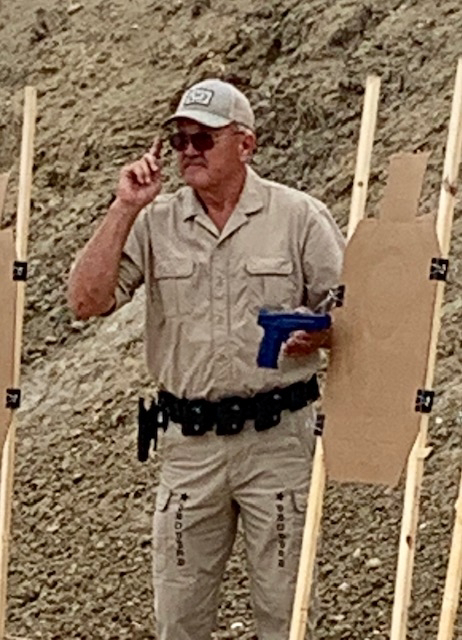 Jerry promotes a "soft focus" on the target, not focusing on a specific point, but rather looking "between the sticks."

Draw. Miculek once again diverts from traditional wisdom with his drawing stroke. Jerry recommends contacting the gun with the dominant hand hitting the side of the stock while the thumb loops over the grip underneath the handgun’s tang versus coming straight down on the pistol. To accomplish this, the dominant arm needs to bring the elbow outboard instead of straight back, a technique typically called “chicken winging” the arm which is ubiquitously decried by almost all modern trainers. Ever the gentleman, Jerry watched my draw and presentation and said, “You’ve got a lot of Weaver in you.” He suggested that I stand with my back against a wall and practice drawing. This would make it impossible to bring my elbow to the rear and would force me to extend it outward.

Eye Focus. “Aim small, miss small” is a cliché used by many trainers to emphasize the concept of picking a minute spot on the target on which to focus instead of gazing at the entire target en mass. The theory being that the deviations of your shots will be smaller by focusing on a particular spot. Jerry promotes just the opposite. He wants to have a “soft focus” on the whole target. He feels that you will see your front sight earlier if you have a soft focus and bring the gun up “between the sticks.” Your eye can transfer to the front sight quicker if it doesn’t have to shift focus from the target (at distance) back to the sight (at arm’s length). More than any of previously mentioned changes on which Jerry worked with us, this was perhaps the most difficult transition to make. Training your eyes to “soft focus” on nothing at arm’s length while you’re preparing to draw and present the handgun is not as easy as it sounds. During practice sessions he suggests that you preface your draw stroke by wiggling your fingers and trying to see the movement clearly with your peripheral vision. This will tend to soften your focus on the target.

As Kay looks on, Jerry explains the benefits of gripping the handgun with your hand biased on the strong side stock.

Practicing anything that differs significantly from imprinted techniques feels awkward at first, however we shot about 300 rounds by noon, and the Jerry’s system started to feel more comfortable. At the end of the day I had expended about 700 rounds having shot more “Bill Drills” than I had in my entire life up to that point. Jerry’s incredible record of competitive wins is indeed impressive, but he’s probably most famous for the astounding speed with which he shoots. It doesn’t take him long to do demonstrations. At the end of the day Jerry demo’ed a “Bill Drill”— it took him an entire 1.39 seconds!! One of his mental keys to rapid fire is to not think about pulling the trigger quickly—-think about taking your finger off of the trigger quickly! 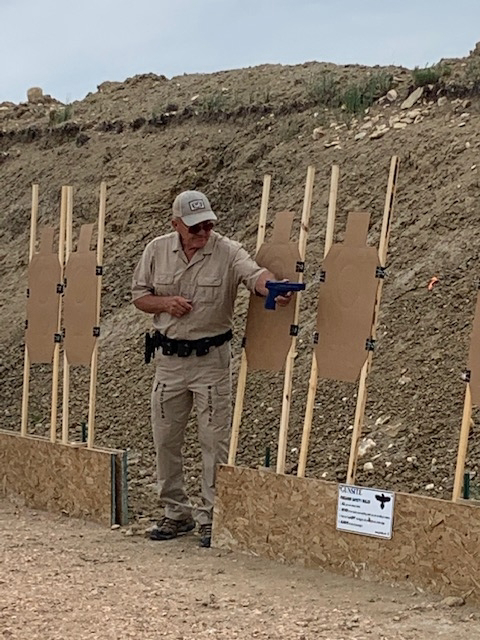 Jerry explains that transitioning between targets is easier with a soft focus.

Over the years I’ve participated in a few classes where I felt that the instructor crammed one day’s worth of material into 3 or 4 days. Jerry’s class was the polar opposite. When the class was done, we were left wanting more……his methodology was starting to feel comfortable but wasn’t yet intuitive. Like his suggestion of practicing your draw while standing with your back against the wall, he left us with specific things to work on. He also empirically proved to us that there’s more than one “correct” way to do things.

The next time you observe someone waxing dogmatic on shooting technique, think of Jerry Miculek and Cleese’s renowned phrase, “and now for something completely different,” You can’t argue with his success.

Greg Moats was one of the original IPSC Section Coordinators appointed by Jeff Cooper shortly after its inception at the Columbia Conference. In the early 1980’s, he worked briefly for Bianchi Gunleather and wrote for American Handgunner and Guns. He served as a reserve police officer in a firearms training role and was a Marine Corps Infantry Officer in the mid-1970’s. He claims neither snake-eater nor Serpico status but is a self-proclaimed “training junkie.”