“Privacy,” one of my sage friends remarked yesterday, “is fantasy.”

On Wednesday, someone in the Oregon City PD posted what appears to have been intended as a “thank you” to Benchmade for helping them with a disposal problem. But Benchmade’s supporting their local cops has turned into a far larger problem - for both - than either anticipated.

That’s because what Benchmade helped the OCPD “dispose “ of was - you guessed it- guns.

And Oregon City PD’s posting of photos of Benchmade folks cutting up guns kicked off one of those “instant firestorms” across social media. It’s a firestorm that doesn’t appear to be slowing. 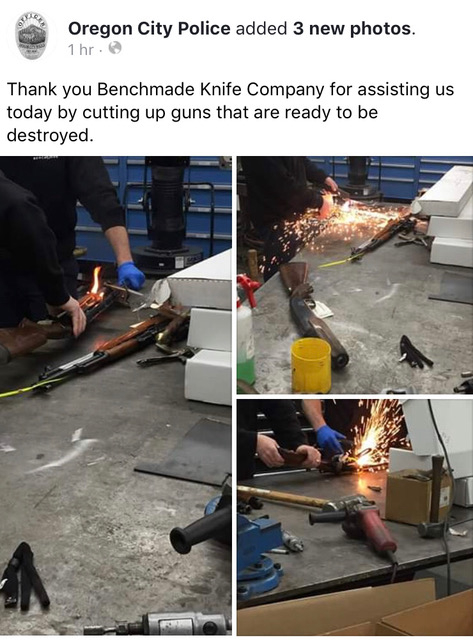 This is the Facebook post that went up (and down) thanking Benchmade for helping the Oregon City PD with a "disposal" problem. It has caused other problems - despite having been pulled down and hastily "explained" by OCPD. Internet screen shot.

Late Wednesday evening, my phone was “blown up” by people speculating, ranting, and positing on the whole thing. When last I checked, the Oregon City PD had passed 2,900 responses- and the majority of them weren’t “go team”.

Benchmade quickly responded as well, posting this on Facebook:

“Benchmade is aware of the recent post from our local Oregon City Police Department.

We apologize for the confusion and concern that this post created. These were firearms that the Oregon City Police Department had to destroy in alignment with their policies. Oregon City Police requested the use of specialty equipment within the Benchmade facility to follow these requirements, and as a supporting partner of our local police force, we obliged the request.

Benchmade is a proud and unwavering supporter of both law enforcement and Second Amendment rights. These are commitments that we do not take lightly and will continue to support well into the future.

The majority of the 9,200+ responses to that posting left little doubt as to where gun owners, many of whom purported to have been owners of Benchmade knives, felt.

They questioned the thinking behind the decision to help the OCPD, pointing out that “proud and unwavering support of both law enforcement and Second Amendment rights” didn’t necessarily jibe with this decision -or the political contribution records cited from OPENSECRETS.ORG.

The conversation spilled over, and by noon yesterday, it seemed everyone imaginable had checked in, except Les de Asis, Benchmade’s founder and CEO.

So I reached out to offer him the opportunity to comment. I didn’t hear anything all day, but other knife companies certainly checked in. Kershaw (“Our knives cut a lot of things but guns will never be one of them”), Zero Tolerance, Spyderco and others wasted no time getting in their licks or reaffirming their “unwavering” support of the Second Amendment.

And don’t start me on the “rant” videos or clips of people grinding up, breaking or otherwise destroying Benchmade knives. There are dozens of them, and more showing up almost hourly.

Late last evening, I got a call from Matt Elliott, Benchmade’s Director of Marketing.

He was, he explained, “the primary point of contact.” And he’d spent the day talking with news people from around the country.

Elliott didn’t offer excuses. In fact, he told me he “wasn’t surprised by the response” to the images, and that it was a “powerful statement..that was out of context.”

Benchmark, he explained, has “always supported the Second Amendment, and the Oregon City Police Department.”

“We remain committed to doing both,” he said, “but we’re not going to be destroying firearms again.”

In this instance, he said, the company “has to own it.”

The OCPD, he explained, had asked for help - as they’d asked in the past - and the company had helped. And, he reiterated, the company would continue to support law enforcement.

As far as the political contributions, Elliott pointed out that Benchmade was in Oregon, and “the people who represent us are Democrats.”

There’s not much more you can say to that- it’s an unfortunate political reality that many of the elected officials who seek to restrict gun ownership are the same officials that have a big voice in the overall business climate.

Oregon City’s comments since pulling down the post haven’t helped.

In a follow up post, Chief Dan Brand and Mayor Dan Holladay explained the “guns were required to be destroyed” either by the people who turned them in, or “as ordered by the court.”

Oregon state law, unfortunately, doesn’t require the destruction of guns “when a case is adjudicated”.

ORS 166.279 “Forfeiture of deadly weapons” makes it clear that destruction of guns -even those used in crimes- isn’t mandated.

Additionally, the statute indicates the “mandated destruction” they referred to isn’t always mandated:

Unlike many angry gun owners, I don’t consider this to be “another Dick’s story”.

Dick’s decisions regarding guns were carefully calculated before they were made. I don’t think Benchmade knowingly engaged in some secretive plot with their local police department. I do think they’re guilty of not considering the fallout of their actions beforehand.

There’s really no obvious conclusion to this story -yet. But there’s still plenty of anger.

It may this is yet another example of a company learning one of the hard, but incontrovertible facts about today’s political climate: with battle lines drawn in the minds of gun owners, any perceived slight against the Second Amendment is intolerable.

They react, immediately, and give no quarter.

Managers at Benchmade may thought they were only helping out the local police department when they agreed to cut up some guns already decommissioned and designated for destruction.

They don’t think that now.

Editor’s Note: What does a company do when it faces a situation like this? That’s the topic of this weekend’s Outdoor Wire Weekend Edition podcast. We’ll be talking with several public relations and crisis management experts this weekend to find out what they’d advise. You can subscribe now at: https://itunes.apple.com/us/podcast/the-outdoor-wires-weekend-edition/id1450042588.

And on Monday, our friend and colleague Tom Gresham will offer his insight into how anti-gun groups are changing their tactics to end-run opposition to new gun restrictions. Don’t miss “They Showed Their Hand” in Monday’s wires.