Browsing the aisles of gear at the ATA Show in Indianapolis this week reminded me that we are actually living in what some might call the golden age of hunting. The gear I’ve seen this that we all take for granted would have been regarded science fiction not very many years ago.

High-tech apparel keeps us dry, warm and functioning in conditions that would have kept all but the most hearty outdoors enthusiasts home around the hearth. We have ultralight packs, powered eBikes to transport us -and our harvest if we bring along the tiny trailer.

The one place where I’ve always thought I saw a gap in the technology was the methods of getting elevated to hunt- yep, the tree stand. I’ve climbed into all sorts-from blue plastic ones that appear to have been “liberated” from job sites where they served a different function to plush permanent ones with cushioned chairs, rifle rests and solar lighting. And I can tell you that there are few breakfasts more tasty than those cooked in a floating hunting blind while waiting for the first light-and first flight-of ducks to arrive.

But the idea of portability has left me colder than wet wool socks. Until Wednesday, the idea of going minimalist while hanging in a tree hasn’t done much for my confidence. And there’s a good reason. Despite having flown airplanes, hung from helicopter doors with cameras and having voluntarily jumped from working aircraft, the kind of heights associated with ladders -and ladder stands- leaves me wobbly.

Tree stands are great devices- if they’re maintained and used correctly with the associated safety devices. We all know that. But every year hunters die in climbing accidents.

Until Wednesday, I’ve successfully avoided the temptation to give some of the climbing gear at any show a try. But a longtime industry friend cajoled me into clambering into a what looked to me like a climbing harness. It worked like an abbreviated climbing harness or half parachute pack, but it was actually the “saddle” from which I was voluntarily going to suspend myself from in the Trophyline booth. 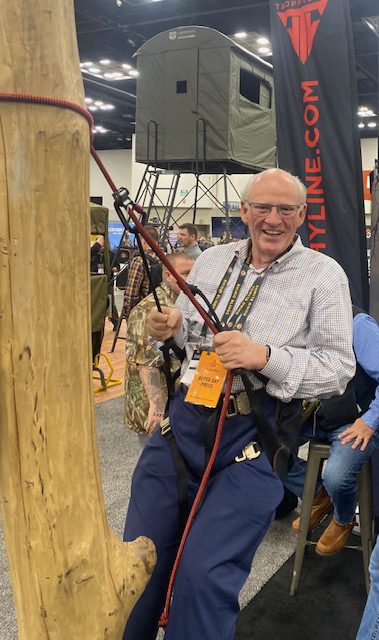 It wasn’t far off the ground or swaying like a “real” tree, but a short test run in a treestand saddle convinced me that anyone could become a very portable hunter. Scott Blackwell photo.

I got in, climbed up, and carried on a conversation with Trophyline’s Shawn Ferguson about the whole idea of portability and hunting. “A hunter can take one of our C.A.Y.S. Backpacks and put their hunting gear and treestand saddle gear in and on it,” he said, “that makes for a very portable hunter.” 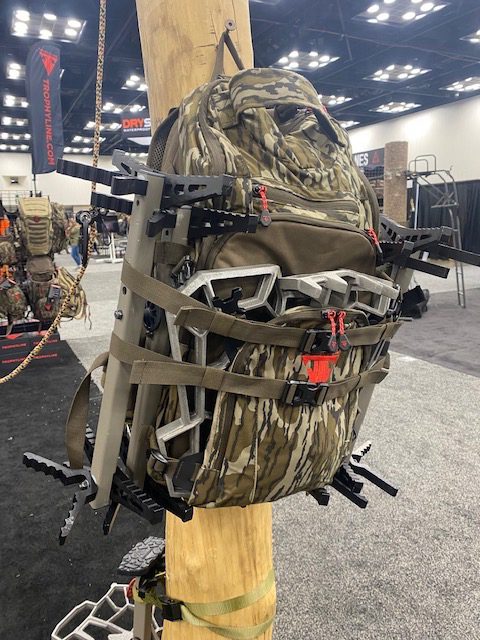 A 1950-inch C.A.Y.S. backpack and the portable climbing gear give plenty of space for a hunter to gear-up and get going.

He’s right. The ability to put all your gear on your back means you can then put yourself (and all your gear) on a sufficiently powered eBike and head for the hills that others might not want to schlep to. Add the folding trailer and you’re ready to hunt, harvest and head home.

Going to do some more investigating on this, but this kind of portability might give aging folks (like me) the means and motivation to head back into the woods.

Finally, some Friday housekeeping. Next week is SHOT Show.

To cover the massive event, we’re going to be combining our Outdoor, Shooting and Tactical Wires as we have in the past. If you’re a Tactical or Shooting Wire subscriber, you’ll get your news, but in The Outdoor Wire. Don’t get excited, it’s temporary.

You’ll also be getting a pair of daily editions. Yep, next week we’ll go to our morning/evening editions. We think it keeps the length of our services more manageable -and allows us to include more news/photographs/information from SHOT.

It’s considerably more work for everyone, but it’s an ongoing part of keeping our promise:

This week, Indianapolis. Next week, Las Vegas. Must be “show season.”