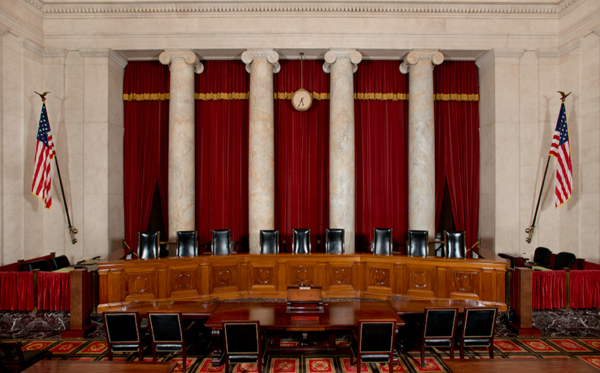 At ten this morning (Eastern) the United States Supreme Court will go into session for what looks to be an extremely impactful term. There are some (potentially) landmark cases that could lead to rulings with the potential to change how laws have been interpreted.

For the first time in a year, the high court will actually return to the courtroom. Last year, all cases were heard telephonically. That was a notable change, as was the taciturn Associate Justice Clarence Thomas’ sudden participation in the telephonic questioning. Known as the “non-speaking Justice” Thomas’ questioning via telephone made it obvious he was not so taciturn when the Justices convened outside the courtroom.

The court will be back in physical session, but the courtroom won’t be packed with spectators, law students or media. Attendance will be limited to the Justices, essential court personnel, lawyers in the argued cases and the two dozen or so reporters with Supreme Court press credentials.

Live audio feeds will continue, but no video.

But for the first time since the historic, but notably vague, District of Columbia v. Heller decision in 2008, the high court will consider what is “reasonable” in relation to restrictions on gun rights.

Heller declared carrying a firearm to be an individual right. But it stopped there. That narrow ruling suggested reasonable bans on concealed weapons were lawful, along with bans on possession of firearms by felons and the mentally unstable, or carrying weapons in certain public places. As a result, the various lower courts have issued some wildly contradictory rulings. The New York case has the potential to severely limit, if not remove, that “wiggle room.”

As background, that limiting language in 2008 was included to get Justice Anthony Kennedy’s vote, and the resulting 5-4 decision.

But Kennedy’s retired, and his replacement, Justice Brent Kavanaugh’s record indicates he is a solid supporter of a broad interpretation of an individual right to keep and bear arms.

In 2011, for example, Kavanaugh took issue with a decision leaving much of the District of Columbia’s gun law intact. He favored striking the entire law- along with the District’s ban on semiautomatic rifles and a gun registration requirement.

Justice Amy Coney Barrett will be taking her seat in the actual courtroom for the first time this morning. She, too, represents what court observers call an “unusually expansive” view of the Second Amendment.

We’ll see on November 3 when the high court hears arguments in New York State Rifle & Pistol Association Inc. v Bruen. This case represents is a real challenge to New York’s longstanding state law mandating anyone wishing to carry a handgun in public demonstrate “proper cause” to obtain a license. Critics say the “proper cause” requirement has been the “rubber ruler” that has allowed the state to grant-or deny- permits with no measurable standard.

So for 2A advocates, this session gives reason for optimism. A law that has prevented average citizens in New York from obtaining a handgun permit could be headed for the ash heap.

If you’re a gun control advocate, this case may start have you heading for your safe space.

Why’s that? Because New York’s longstanding law has been used as a foundational argument for equally restrictive restrictions on firearms from the District of Columbia to Hawaii.

The court striking down portions of the New York law will impact their laws, too. And declaring that law void would quickly open the floodgates for challenges to any law that has ever referenced New York’s law in court defenses.

Many cases are already queued up in the lower courts, waiting for the Supreme Court ruling on the New York case.

There’s another, less obvious, reason gun control groups are so concerned about the New York case making the docket.

The lower courts, including the appeals courts, all ruled against the suit -but the Supreme Court agreed to hear it anyway.

If the court wasn’t looking to do something, it didn’t need to hear the case.

Consequently, the big question about this case isn’t really “what” the court will do, it’s “how much.”

If the court rules that the New York law is unconstitutional, New Jersey, Maryland, Connecticut, California and Hawaii’s restrictive gun laws will have problems, too. The outcomes in a number of cases literally hinge on the Supreme Court decision.

If New York’s restrictions are limited by the court, other laws will be impacted. If the law is tossed, restrictions in other places will be nullified as well. Lower courts are compelled to rule based on the SCOTUS decision.

A number of other suits regarding limitations on the Second Amendment are also waiting in the wings, from laws limiting gun ownership by young adults (ages 18-20), to FOID cards, magazine capacities, and 3-D printing.

President Trump’s appointment of Justices Amy Coney Barrett, Neil Gorsuch and Brett Kavanaugh, tilted what was considered a liberal-leaning court toward what many consider a more conservative leaning. That’s why conservatives have been so infuriated as Chief Justice John Roberts has so frequently sided with more liberal interpretations of cases.

On many issues however, this Court isn’t as likely to require a Roberts vote to decide questions, especially those involving the Second Amendment. In fact, a Second Amendment case even being on the docket implies “conservative” judges demanded it be there.

Chief Justice Roberts has assiduously avoided the 2A in the past, but even the Chief Justice can’t overcome a majority vote to hear cases.

Should the other five “conservative” justices agree on issues- including expanding the narrowly defined Heller decision, they’ll carry the day - without a supporting vote from Chief Roberts or affirmations from fellow Justices Sotomayor, Kagan or Breyer.

While 5-4 doesn’t necessarily represent a consensus, it is a majority. In the SCOTUS, the majority rules. Consequently, it’s safe to predict spirited arguments and equally fiery dissents should New York’s law be tossed in its entirety.

All that implies potential fireworks and the likelihood of some hysterical predictions (pre-and-post a ruling) from gun control groups.

I’ll be off the job for a few days, but - as always- we’ll keep you posted.