Guest Shot: Fighting or Shooting – Which to Practice?

It is one of the finest pieces of cinema ever produced, I believe; it is THE SHOOTIST (1976), the Duke’s last film in which Ron Howard (Gillum) says to John Wayne (J.B. Books):

Gillum: "How did you get into so many fights and always come out on top? I nearly tied you shooting!"

Books: "Friend, there's nobody out there shooting back at you! It isn't always being fast...or even accurate...that counts. It’s being willing! I found out early that most men, regardless of cause or need, aren't willing. They'll blink an eye or draw a breath before they pull the trigger...and I won't!"

I was still in the basic police academy when I saw this movie in an actual theater -- VHS and other consumer video formats did not yet exist. When I heard this exchange in the film, it hit me just like being slapped in the face. It stuck with me and I remembered it. When consumer video did become available, I had a copy of that segment made at a shop that specialized in making VHS copies. I have used it continuously since becoming a firearms instructor in 1982. In the book THE SHOOTIST, the author goes into more detail during this exchange and if you can find a copy, I suggest you read it. If nothing else, it’s just a great novel.

While this may incense a few folks, the truth is teaching shooting is not that difficult. All one needs is a foundational knowledge of the mechanics required and then recycle them to a student. Some people are good at this while others cannot communicate the directions to the restroom, let alone proper technique. Many others cannot perform the techniques they are teaching. That said, “instructors” do this all across the country every week and, for the most part, I am glad they do. Like Robert Heinlein, I believe an armed society is a polite society. If nothing else, it is certainly more stable, secure and safe. My concern comes in the quality of training many receive leaving them thinking they are prepared to handle what may come their way when in reality, they are not.

Shooting is not the problem; it's teaching students to fight … to be combative … which is much more difficult. Many instructors really do not comprehend the concept, believing they are one in the same. In my worn-out, paper version of the Webster’s Dictionary, the word combative is defined as “ready and willing to fight” -- which is the goal in my view. I am not bashing our nation’s firearms instructors, what I am talking about is the application being taught. In truth, conflict should be AVOIDED at all costs. Every time you enter conflict, you run the risk of losing -- no matter how well trained. In addition, if there was ever a time to “break contact,” the current social climate in this country makes it now.

If an instructor does not understand the dynamics of conflict, it’s easy to focus on splits, draw times, speed of reload and other skills that can be improved with practice. However, does such skill make one better prepared to fight? Skill certainly makes one more confident, but does it make one more “willing”? As the author of THE SHOOTIST so clearly pointed out -- borne out by history -- the winner of a fight is not necessarily the person with the fastest draw, most bullets, superior accuracy, best gear. It’s the more ruthless of the two combatants, the one who will not hesitate to inflict harm on an opponent; the one who will engage without conscious thought. 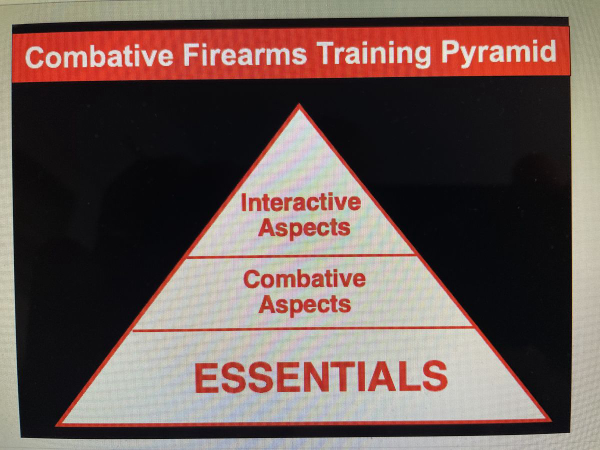 Combative firearms training must be addressed at three levels, with each level being built upon the other. The foundation of this pyramid is what I like to call “the essentials”. These are the skills that are required to prevail in armed conflict. This is the shooting part of fighting as the essentials comprise what many call the “fundamentals of shooting”: stance, grip, trigger control, use of sights, holster skills and required manipulations such as stoppage clearances and reloading. These skills are the fun part of the process, they are what everyone likes to do. Getting better at these skills is a worthwhile goal, but this is only the beginning. It’s not the end.

Once the foundation is laid out, we must build upon it with the Combative Aspects. We take those ‘fun’ foundational skills and apply them to fighting with such things as one hand shooting and manipulation, shooting in unconventional positions, movement with purpose, use of cover and concealment, negotiating terrain, reading our environment and other people, our state of mind, understanding what real conflict entails, letting go of fantasy and other combative concepts and related subject matter.

The final stage is the Interactive Aspects. This is commonly called Force on Force Training and it is oftentimes the most overlooked aspect. Why? Because it requires performance. Students have to put themselves out there and will likely fail, which is where the REAL learning occurs. Over the years I have seen any number of such training opportunities get canceled as students start to think about what is to come and how they will be perceived. “I’m going to look bad”, “people are going to realize I can’t walk my talk”, “this is going to hurt!” and on and on. Proper interactive training will reveal weaknesses in one’s skills…something many will not like… but is this not the goal?

So many interactive training courses focus on scenarios, which is certainly fine, but it can be so much more based on the imagination of the instructor. This is where an instructor’s true understanding of what armed conflict really is will reveal itself. Those who do not truly comprehend it will focus on scenarios, many of which are not relevant, such as the “you are on a plane at 35,000 feet when a group of terrorists hijack the plane…” Unless you are a Federal Air Marshal this situation is downright ridiculous. A scenario that has you standing in line at the convenience store when a robbery breaks out is far more likely…but not near as “sexy”.

Areas where interactive training can be of huge benefit is those skills too dangerous to undertake on the live fire range such as moving and shooting in and around non-hostiles that may be in the battle space, engaging in a 360-degree environment including a true 360 scan, domestic ambush situations, hand to hand combat situations that move to guns, fighting inside a vehicle and more. It is really up to the imagination of the instructor and their understanding of what REAL conflict is. Interactive training should build confidence in the student that the skills they learned at the first two levels will work when utilized. This confidence will go a long way towards reducing FEAR, which is the reason most people fail under the pressure of conflict. Remember, hesitation can kill…

Every so often, someone will post photos of gang members or insurgents shooting their guns sideways, over their heads or holding around the edge of a building and viewers laugh, jokes and ridicule the VERY dangerous people in these photos. This ridicule comes from people who, mostly, have never been in a fight…have never had someone try to do them harm. Forget that holding a handgun sideways and shooting DOES help control recoil, they seem to forget that most of the people pictured are battle hardened and more than WILLING to kill. They have likely been in multiple gunfights…battles, even…no, they do not look as cool as many American shooters on YouTube, but they are very, very effective at what they do…. killing.

So, can we teach fighting? We can, but it is more difficult than teaching shooting…and it’s not nearly as much fun during a fantasy weekend. The skills of shooting and fighting are similar, but their application is different. How can you tell? Well, while not all inclusive, here are a few examples: If you are mostly concerned about your split times, draw speed, perfection on a particular drill or how you look when you do these things, you are probably shooting. If you are focusing on hitting the thoracic cavity multiple times every time you shoot regardless of the orientation of your body or how you look when doing so, you are probably fighting. If you are engaged in regular interactive training and not bitching, crying or making excuses for poor performance…just trying to get better each time…you are probably training for the fight.

The person who will win in a gunfight is not necessarily the best shooter, they are the person who can control their emotions and read the rapidly unfolding situation for what it really is and adapt their skills accordingly, applying as necessary. This will require a large amount of self-control and deliberation. Cutting a half second off your draw time or reload will likely have no effect.

These are but a few concepts I believe show the difference in application. Before I close, I would like to say I have nothing against competition and this article is not to be viewed as anti-competition. Shooting under pressure offers a lot of benefits and let’s face it, life is short. If you enjoy competing in the shooting sports, you should do so. All I’m saying is that when you are training…and training is nothing more than preparation for whatever activity you are focusing on…you should understand the difference.

Now, which are you doing?

Dave Spaulding is a professional firearms instructor with 36 years' experience in Law Enforcement and Federal Security. The recipient of the 2010 Law Enforcement Trainer of the Year Award from the International Law Enforcement Training and Educators Association (ILEETA), Dave has worked in all facets of law enforcement including communications, corrections, court security, patrol, evidence collection, training and investigations. He was a founding member of his agency’s SWAT Team and acted as its training officer for 8 years. He spent a year in an undercover capacity and was the commander of a multi-jurisdictional narcotics task force, has been an adjunct instructor at the former Heckler & Koch International Training Division and the Tactical Defense Institute. In addition to his many published articles (over 1,400), Dave is the author of two acclaimed books, Defensive Living and Handgun Combatives. He operated his own training company with focus on “the combative application of the handgun” www.handguncombatives.com .