Notes From The Field (Part 1): The Disappointment of Doves

September 1st was the opening day of dove season, or as I like to refer to it, disappointment season. Hunting doves in Arizona is a thing. It’s a big thing, in fact. And I was out there before sunrise with a shotgun, a couple boxes or shotshells, and a whole lot of hope. 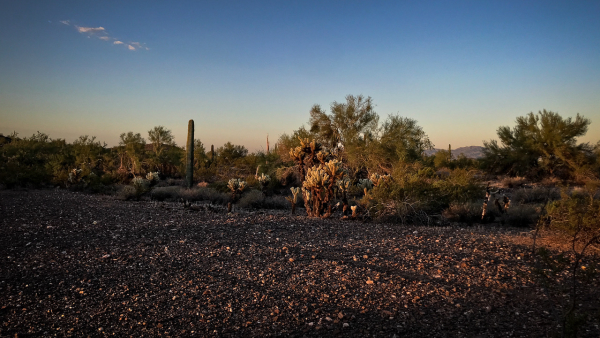 For much of Arizona the dove field isn’t an actual field. It’s a rock covered, cactus laden desert that kinda sucks to trek across in the dark. Oh yeah, there are also rattlesnakes. Surprise! Photo by P. Erhardt

For the second season in a row I was heading out to the field. Who am I kidding, this was more like the surface of the moon with cacti than a field, but there I was with a TriStar 12ga over-and-under I ordered from Palmetto State Armory.

I didn’t need a new shotgun. I had an over-and-under, two actually. I had a semi-auto 12ga. And, I had 12ga pump. So, why did I buy another? Simple. One is none, as we all know, but what’s not as commonly well known is that four is also none. It’s a fact, look it up.

Shotgun in hand, ammo on my waist in one of those tool/nail aprons, and a folding camo chair over my shoulder, I walked across all the jagged rock one can find in a quarter mile walk, and set myself down for those early morning birds.

The national average for dove is five shots per bird. An hour in and I was one for eight. Ten minutes later I was two for nine and calling it a day. I still had to go to work, because the opening day of dove season isn’t a national holiday…like it oughta be. 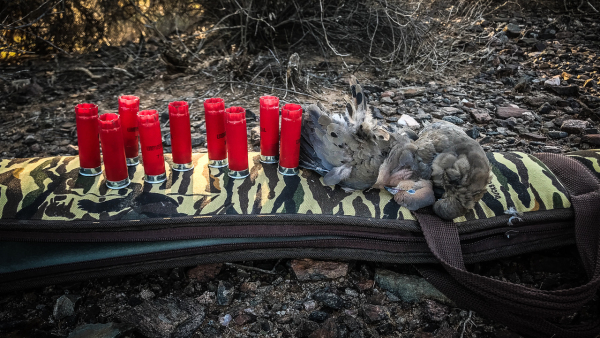 I saw a number of doves the morning of opening day, but more than a few flew by in stealth mode, and sometimes in formation. These were clearly doves from nearby Luke Air Force Base. Unfortunately, of those I got a shot off at, only two ended up in my bag. Photo by P. Erhardt

The great thing about dove hunting is you can get two bites of that particular apple each day. After work I returned to the rocky desert, this time accompanied by Kayla, a colleague from work.

Kayla, who’s only true contribution to my dove hunting was explaining to me I could legally hunt little more than a mile from my own front door. (How did I now know this?)

I say that’s her only contribution because she got in my head with her sinister mantra of, “You miss 100% of the shots you don’t take.”

This is a great dating mindset. It is a horrible dove hunting strategy. I am convinced that Kayla is in the pocket of ‘Big Shotshell’ out there working to convince shooters to load and shoot every possible shotshell they can find.

Thanks to her, I went one for 14 in early evening hunting, with more than a few attempts to shoot birds just slightly below what one might consider low earth orbit.

The one I did hit helicoptered lazily to the ground 15 to 20 yards due east. Here’s a question. Do you realize how hard it is to find a gray/brown bird in the desert as the sun is setting?

Here’s a better question. Do you realize how hard it is to find your way back to your camo chair in the desert when you’re looking into the setting sun? Spoiler Alert: It’s really damn hard.

You’re probably thinking I should have marked my location on one of those handy hunting apps, right? Well, I do have the onX Hunt app. It just seems to work a whole lot better if, you know, you bother to use it. 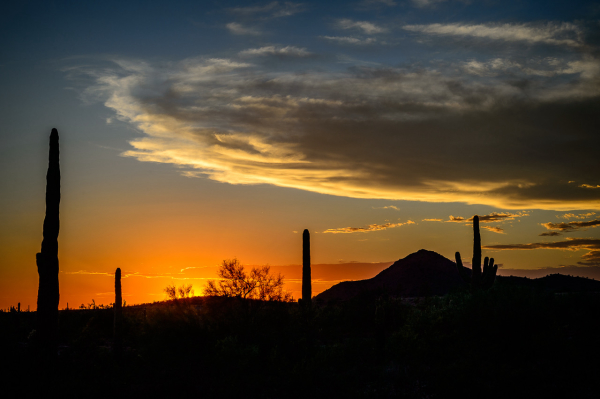 Hunting the late afternoon until sunset has its perks here in Arizona. You might see fewer birds, but the vistas never seem to disappoint. Photo by P. Erhardt

So, I closed out opening day of the 2022 dove season with just three birds taken on 23 shots – so much for the national average – with one lost bird, and one lost camo chair.

However, this still beats the hell outta not hunting dove.