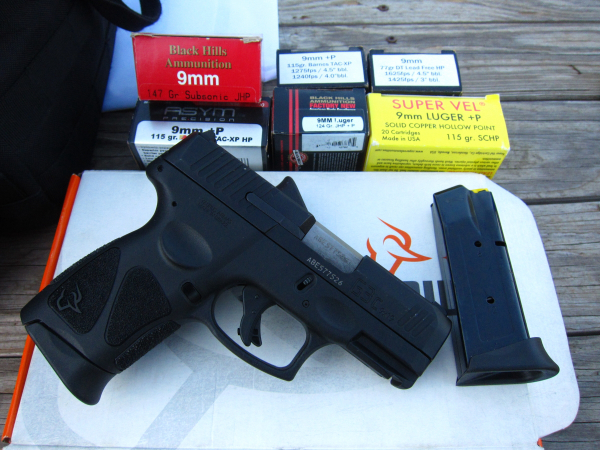 About six weeks ago, I was notified that I had a ‘non-disclosure’ agreement to sign. From Taurus, it appeared that a new gun was forthcoming. While some media folks got a sample in advance of release, the combination of factors relating to national and world events, I was one of those that lagged behind. It’s okay as it gave me time to check into certain aspects of the line before – and slightly after – the release.

For example, I saw a firearms retailer’s video channel had a short discussion about the new Taurus. A thriving concern, it seems they haven’t been able to keep Taurus autos on the shelf. The presenter noted that the top selling handgun in that shop for the past five years running was the Taurus G2C, the predecessor to this model.

The sample arrived – the G3C, a compact version of their G3 -- and I got a range trip in the following day. Here’s the ‘digest’ version of my findings.

Features on the updated pistol include the contoured palm swell, ‘grippy’ textured gripping surfaces on the frame, Taurus’s third-generation trigger system, and three 12-round magazines (in ‘free’ states). The suggested retail is $305.74 – with three magazines. 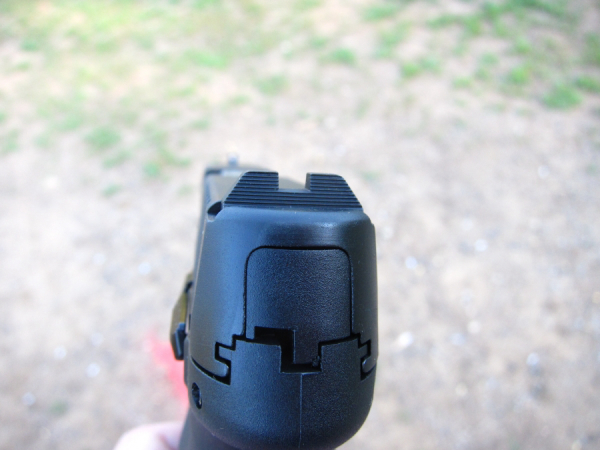 The rear sight is steel and is nicely serrated without any painted distractions. Below, the new gun features an unobtrusive thumb safety and shows the serial number there, as well as under the dust cover. 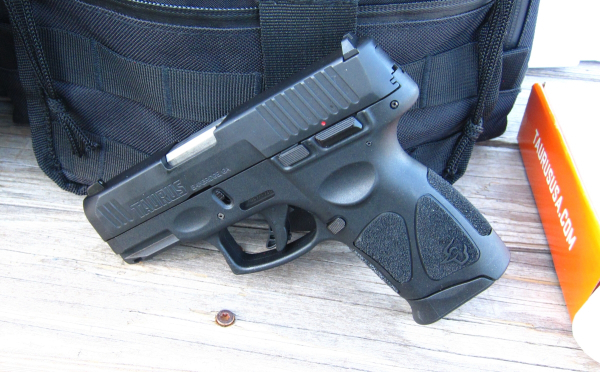 The rear sight is black serrated steel with no white dots – a really great idea from the standpoint of use. I prefer vision-drawing treatments for front sights, not rear sights. The front sight is also fabricated of steel and features a centered white dot. The “flat-ish” trigger, part of the Taurus “third generation” trigger system, is backed up with a small thumb safety. The trigger has a strange feel to it, as it has a restrike capability – better for dry practice than trying to refire a ‘dead’ round unless you are prevented from immediate action. It makes the trigger feel unlike any I commonly use.

The new 9mm pistol features Tenifer finish on the slide, a 3.2” barrel of stainless steel, a firing pin plunger safety, the trigger ‘fin’ safety and a weight of 22 ounces (with an empty magazine in place).

The ‘operational controls’ have what the factory refers to as a “black Teflon coating.” The gun is 1.2” wide. 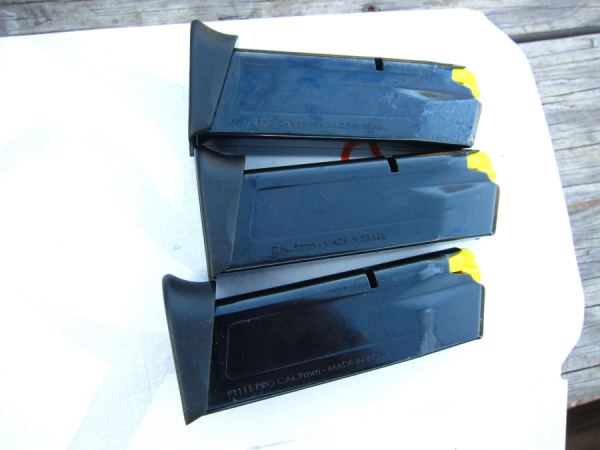 As to magazines, it’ll apparently taking the longer magazines of the Taurus G3 with the accompanying increase in capacity. Two of the sample magazines were marked “PT111 PRO” and one “9mm.” Apparently building guns around the magazine is still a ‘thing’ – and it’s very smart.

The sights, I’m told, can be replaced by sights meant for GLOCK pistols. That’s also smart. Make use of the after-market product lines that already exist.

Considering after-market support, companies like CrossBreed Holsters, Viridian, and TRUGLO already make goods meant for use with the new gun.

The first five rounds fired on the range trip were the vigorous 115 grain Solid Copper Hollow-point +P rounds from Super Vel. I fired these on a small IPSC style steel silhouette. I wondered where all the rounds went.

Time to put up paper. 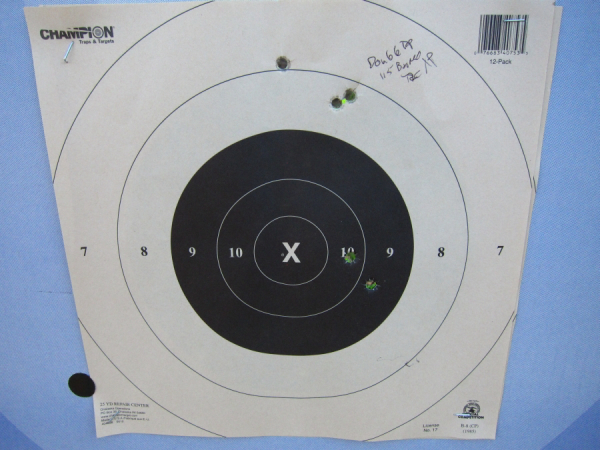 The odd 'three plus two' shot group syndrome; a first for me.

I shot for groups using a seated rest over a range bag to fire five-shot groups. The gun shot high and tended to throw patterns of “three-and-two” at the outset. That was surprising. I find that semi-auto pistols generally do a “1+4” pattern; the first round is seated by stripping it off a loaded magazine from slide lock or from slide in battery – but not by being fired. Ayoob has noted this tendency for years and I adopted the general practice of loading six for a five-shot group and discarding the hit from the first round.

I failed to do that this time. The DoubleTap 115 gr. Barnes TAC-XP +P put three high on the B-8 bullseye, tightly grouped, and two low. This gave a 5 ¼” extreme spread, with the best three striking into 1 ½”.

Black Hills 124 gr. JHP +P, normally an accuracy champ, likewise printed a pair high with three going just right of center (I used a six o’clock hold on the bull). We were still at 5 ¼” with three going into 2 ¼”. 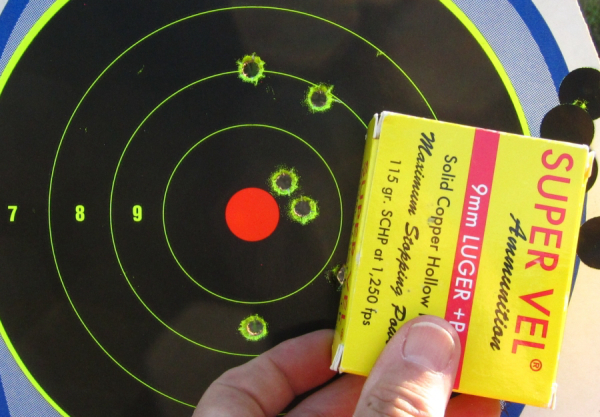 Finally, Black Hills 147 grain JHP shot into 3 7/8”. Using a six o’clock hold, the group was centered and put three of those into 2 ¼”. Seeing that, I concluded that I’d use the heavier bullet/standard pressure load in this gun for proximity in point of aim/point of impact. If I could change sights to suit, I’d take a hard look at the Super Vel offering as the gun sure seemed to like that bullet. 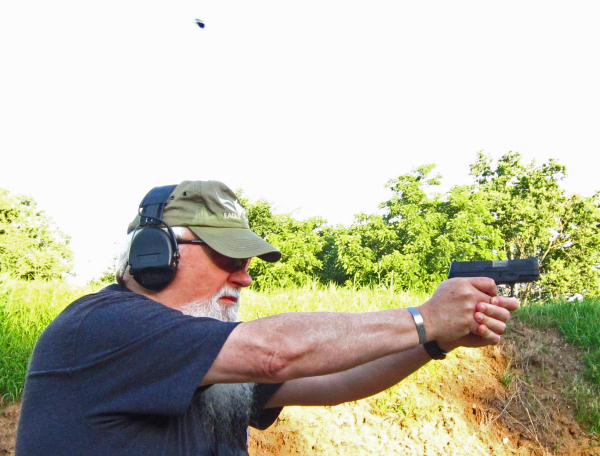 Topping the magazines with 12 rounds each, I commenced running an assortment of rounds from 77 grains to 124 grains mixed into each. I had one magazine that didn’t feed the first round. That could have been an ammo problem; after I’d fired the other pair of magazines in handling drills, the problem magazine fed without a hitch.

The gun is quite controllable and shot fine through handling drills. I just had to remember to hold low on the target to make the hits. I’d like to also mention the manual is one of the best done I’ve seen over my life – though factories have been getting better about the manuals they ship these days. The Taurus manual is really good.

If you’re looking for a value priced 9mm carry gun, the Taurus G3C might fit your needs. For capacity versus size, the safety setup, steel sights and three magazines included, it’s not a bad package.