Kicking The Can Down The Road

In a decision that really shouldn’t have come as a surprise, a three-judge panel of the Ninth Circuit Court has put an indefinite hold on Judge Roger Benitez’ ruling that California’s “assault rifle ban” was unconstitutional.

The panel granted the hold on the decision which would have essentially eliminated California’s longstanding ban on modern sporting rifles “pending decisions on other gun cases now before the court.”

Net/net for California gun owners: the ban remains in place. And that’s likely to be the case until all the pending cases are heard -or the Supreme Court issues rulings that eliminate the need to hear the remaining cases.

Judge Benitez, or more correctly, his rulings, are decidedly on trial in the Ninth. One of the pending cases, his ruling that overturned the state’s ban on large-capacity magazines, is scheduled for an 11-judge “en banc” hearing. Arguments in that case are underway, and it doesn’t look good for Judge Benitez. A majority of the judges on the panel are Democratic appointees-and the ban was the result of a ballot measure authored by then Lieutenant Governor Gavin Newsome.

California’s restrictive gun laws, and the legal challenges to them, are most likely headed to the United States Supreme Court. If the Supreme Court finds against them, the laws banning “assault rifles” in six other states and the District of Columbia could be in trouble. The conservative majority on the high court have been openly critical of restrictions on the modern sporting rifle.

And twenty-two states, including Arizona (covered in the Ninth Circuit’s territory) have asked the appeals court to uphold the order striking down the California law. “Calling modern rifles ‘assault weapons’ is a misnomer- they are most often used by law-abiding citizens for lawful purposes like personal protection or target and sport shooting,” they argue, “There is nothing sinister about citizens keeping or bearing a modern rifle.”

This another of the superheated cases where longstanding restrictions are being challenged. It was 30 years ago when California passed the ban following a shooting where an AK-47 was used to kill five children in a Stockton schoolyard. Since then, the state points out in its argument to overturn the Benitez ruling, five federal appeals courts have rejected Constitutional challenges to bans on modern sporting rifles.

In issuing the stay, the Ninth has once again affirmed its reputation for either using convoluted rulings or delaying actions to avoid cases that challenge longstanding restrictions on lawful firearms ownership. If/when this case makes its way to the Supreme Court, however, things may be different. Today’s Supreme Court, with its conservative-leaning majority, is far less likely to divide when it comes to gun rights.

Meanwhile, the Biden administration’s choice to head the ATF, David Chipman, is looking increasingly less likely to get the necessary votes in the Senate for confirmation. The vote has already been delayed, and on Tuesday, Senator Susan Collins (R-Maine) said she would vote against his confirmation. In explaining her position, Collins said he was “unusually divisive” and had made public statements “that demean law-abiding gun owners.”

She also pointed out that Chipman’s appointment would do significant damage to the collaborative working environment that must exist between ATF, the firearms industry, sportsmen, and women, and other law-abiding gun owners exercising their Second Amendment rights.”

That, however, doesn’t mean Chipman can’t be confirmed. Confirmations are not subject to the 60 vote filibuster threshold, meaning no Republican votes are needed for the confirmation. That, however, would mean that several Democratic Senators who have already expressed reservations over the controversial nominee, would have to put party loyalty ahead of their pro-gun constituencies. 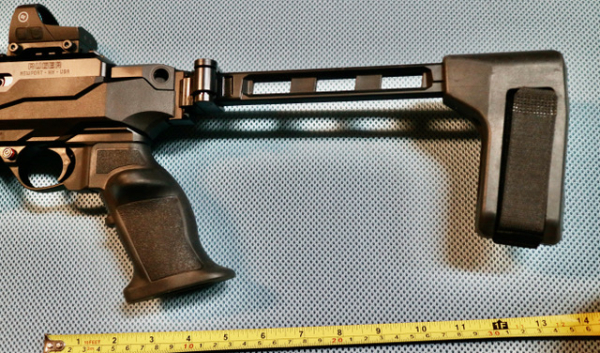 Pistol or short-barreled rifle? If the ATF’s proposed regulation change regarding stabilizing braces is adopted, millions of gun owners may find themselves owners of guns that fail the ATF’s “points system” and turn them into instant felons.

Meanwhile, the ATF, absent Chipman, continues to move toward adopting new guidelines regarding the use of stabilizing braces on pistols. The proposed regulation would add a sentence to the end of each definition that “clarifies” the term “rifle”. Under their proposed guidelines, a “rifle” would be: “any weapon with a rifled barrel and equipped with an attached ‘stabilizing brace’ that has objective design features and characteristics that indicate the firearm is designed to be fired from the shoulder.”

Broad, you betcha, and not by accident. Attorney General Merrick Garland has directed the ATF to come up with what is essentially a ban on stabilizing braces.

Now is the time to let the ATF know your position on the proposed change. You can comment on the proposal at: https://www.federalregister.gov/documents/2021/06/10/2021-12176/factoring-criteria-for-firearms-with-attached-stabilizing-braces#open-comment