Retired cops on a line for the revolver-portion of LEOSA qualification.

Shooting double-action revolvers isn’t absolutely different from shooting semiauto handguns – but it has a few differences. As we enter the “long, dark winter,” it’s probably appropriate to examine shooting the ‘older’ hardware, though DA revolver designs aren’t terribly older than the pistol designs that followed.

Being “backwards compatible” with previous, marginally less infringed types of artillery could be a handy skill. Without getting into the current insanity, let’s focus on aspects of the accurate shooting of double action revolvers.

First, there’s a lot of verbiage about trigger ‘press.’ For my purposes, I find it better described as “rolling the trigger back.” That visual language is a better description of how I run a DA revolver trigger – as well as the pivoting trigger on various striker-fired designs. The ‘press’ is a best description of the method of shooting guns with sliding triggers -- or the cocked revolver.

I use the distal join of the index finger, the “power crease,” as described by Massad Ayoob. This gives enhanced leverage over the trigger. Remember, you’re trying to keep the revolver still – whether it weighs just under 12 ounces or it weighs 40 ounces – during a trigger roll that requires up to around 12-14 pounds of pressure.

Keeping it still means that the sights stay in alignment on the same relative point on the target as you cock the hammer by using the trigger, it rotates a firing chamber into line with the bore and the sear breaks, allowing the hammer to fall.

Then you’re managing the pressure of the rebound – trigger return – spring as you allow the trigger forward into battery.

Impossible? Tell that to Jerry Miculek.

Like the auto pistol, the big part of trigger control is stabilized by grip. That’s not the thing on the back of the gun people like to change around; that’s what you do with your hand … grip.

Your hand has to be high on the backstrap, but still allow an exposed hammer to arc back before going forward. If the hammer isn’t exposed – that’s not “hammerless” by the way – so much the better. Crowd up high to get your hand up on the gun. 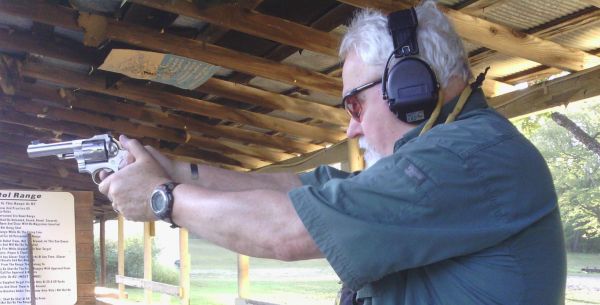 Above, the grip is high on the backstrap, thumbs back away from the flash gap at the front of the cylinder. It's firm, a crush grip during firing. Below, stocks that cover the backstrap can make trigger reach too far for many; this is easily changed. 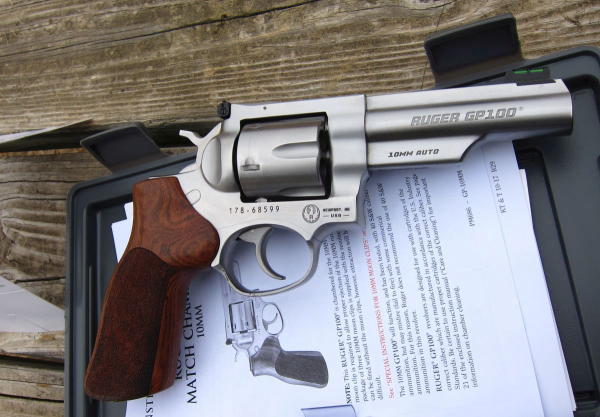 Speaking of stocks, your finger has to be able to reach the trigger when it’s at rest. And you’re burying the index finger into the trigger guard to get the distal joint centered on the trigger. I have to have stocks with an open backstrap to accomplish that task except on the smallest of heaters.

Learning to shoot the gun this way makes it easier – just take frequent breaks and “shake it off.” Trying to get relevant practice with fatigued, cramping hands isn’t helpful.

The Claude Werner revolver “ball and dummy” exercise – explained here and here – is one of the best ways to get the whole “hold the damn gun still while working the trigger” thing down. My take on this exercise is to make one hit per presentation from low ready. I bring the revolver up and make the best trigger roll possible while the sights are within the arc of movement over the target. It fires and I follow through on the sights. 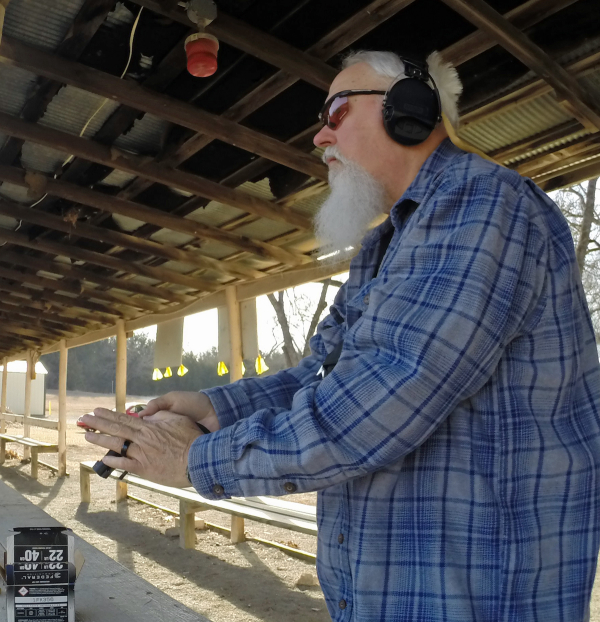 Using the S&W M43C revolver, above, Grassi shoots the Claude Werner variation of the 'ball and dummy' exercise - shown here spinning the cylinder after a shot. Below, at five yards, shooting the exercise with the Ruger LCRx and CCI Stingers got a one-hole group. 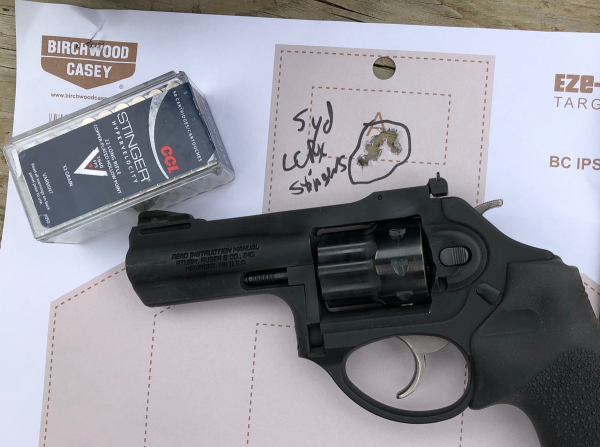 Lowering the gun to ready, I open the cylinder and spin it twice, then close the revolver onto the cylinder. I repeat that process. At some point, I get a “click” instead of a bang. As I’m centering my physical focus on the trigger and my visual focus on sights, I see if I moved the gun at ignition – or at the failure to ignite when there’s an empty under the hammer. When there’s a click, after follow through, I’ll try one more. Early in the game, there’s a hit on target. Eventually, there’s a pair of “clicks,” the hammer falling on expended rounds.

I won’t go past three of these clicks without lowering to ready and starting over. This makes eight-ten live rounds (in a 22 revolver) last a long while and gives me a lot of presses on that trigger.

That’s the exercise I used when remediating a peace officer who was having trouble with his issued striker fired pistol. I used the Ruger GP100-22. With the lusty trigger weight, he fatigued quickly, but we went slow. Using Claude’s method, he was clustering hits to the center in no time and it cleaned up his service pistol score.

We can learn a lot from learning to shoot DA revolvers – and it’s a skill that’s just handy to have.