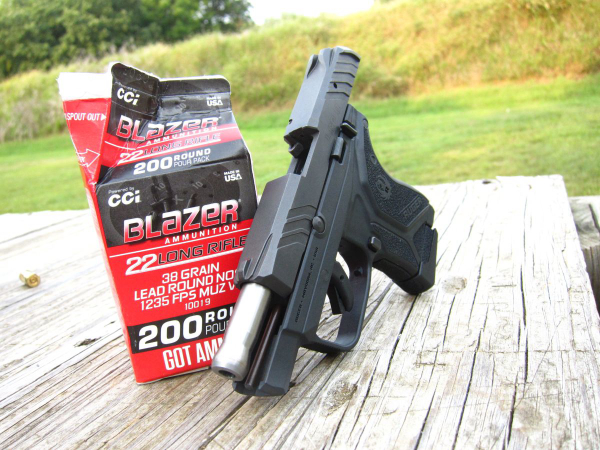 During the latest ammo drought, I’ve been careful to check prices on the ammo that is available. As far as availability, there have been spot supplies of ammo but in a fairly narrow band. I continue to find a little 350 Legend and there has been shotgun ammo during early weeks of hunting season. While 22 rimfire has been wandering into stores, it seems like a lot of it – all I was seeing -- was in fifty-round boxes. The low(er)-cost bulk packs had been practically unavailable.

I recently found bulk 22 in two separate Academy stores; one during an extremely rare road trip. The round in question was the CCI Blazer 22 LR “200 Round Pour Pack.” This load features a 38-grain lead round nose bullet at a nominal 1,235 fps (likely out of a rifle barrel).

I’ve shot several pounds of CCI Blazer 22 LR in the past from the old cartons that held 10-fifty round boxes of 40gr. round nose lead ammo. I’d not seen the more recent iteration until earlier this year when it appeared on the CCI website.

I acquired some of the new ammo and, being a handgun shooter, I elected to check it out in a pair of handguns. While I didn’t use the most classically accurate 22s, I thought the 38gr. bullet out of guns most likely to be carried afield by folks who enjoy the outdoors, not formal target shooters. One gun was a revolver and the other a micro-auto. 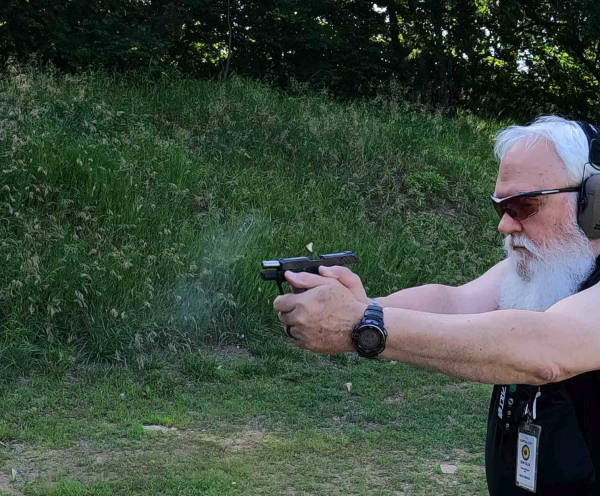 The M63-5 is a stainless steel “kit gun,” with adjustable rear sight, a HI-VIZ red fiber optic front sight and a three-inch straight profile barrel. The 8-shot gun weighs in at 26 ounces and my sample has the Crimson Trace LG-405 laser grips – that I installed.

I like them and they fit my hand. The laser aiming option was turned off during this exercise.

The auto pistol was the Ruger “Lightweight Compact Pistol” – Version II – in the form of the
“Lite Rack” LCP II, chambered in 22 Long Rifle. The gun has the “Lite Rack” moniker because it is easy to manipulate. It’s like other LCPs – and it’s not. The open top slide, integral sights and internal hammer – visible when cocked – is similar. Like the other LCP II model in 380, the slide will lock open on the (current 380) magazine. It’s single action, unlike the first LCP versions. It weighs in at 11.2 oz. and has a 2.75” barrel. 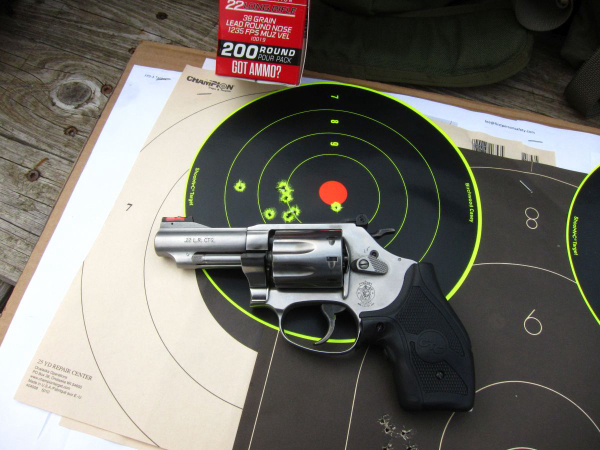 The Blazer bulk-packed 22 ammo shot about as well in the ca. 26oz M63 (above) and the flyweight, short LCP II (below). Great for plinking and practice. 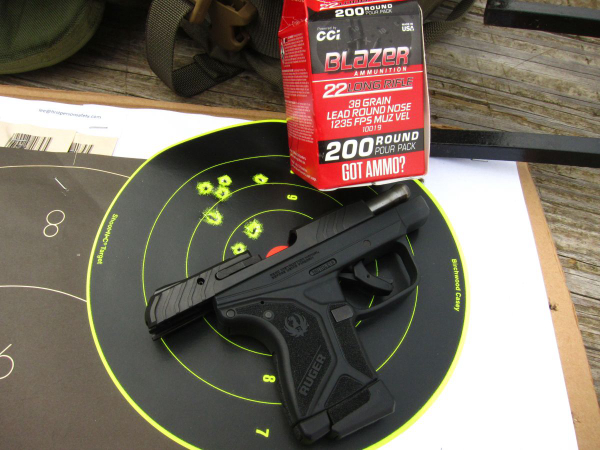 There’s a manual safety – which doesn’t exist on the centerfire ancestors. Simple to get off of “safe” – pushing the safety in the direction you need the projectiles to go – it’s not easy to “accidentally” apply. The manual safety can only be applied when the pistol is cocked. It disconnects the trigger from the hammer. The safety, when applied, blocks the hammer as well, preventing contact with the firing pin.

There’s a magazine disconnect feature on the rimfire gun. It’s not a “safety” as it won’t prevent firing when an empty (or loaded) magazine is installed. And it’s no substitute for locking the slide open and visually/physically inspecting the chamber to check the condition.

The factory doesn’t recommend subsonic or “match grade” 22 LR; the round must have sufficient energy to run the slide. It would be interesting to see how the bulk-pack Blazer ammo would run.

At ten yards, both guns shot similar groups in spite of the S&W’s superior sights -- and the fact that it’s a larger gun, with a more handy gripping surface.

At three yards, I put 8 hits into a single hole with the Kit Gun, shooting double-action. With the LCP II, the group was the size of a Kennedy ½ dollar coin – remember those? –largely due to the sights. I experienced no failures to fire, no function issues and – on the slightly breezy morning – no detectable smoke.

It was a pleasant shooting experience – and excellent trigger control practice. The ammo is quite functional. While not match-grade, it’s plenty accurate enough to test the skills of most of us – including me.